Charts of the Day

On September 21st, the U.S. Small Business Association released a report titled The Impact of Regulatory Costs on Small Firms. The SBA estimated the total cost of Federal regulation per household (all figures in 2009 dollars): 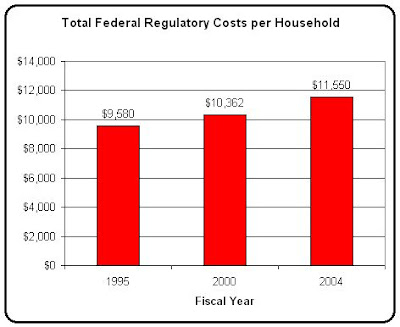 source: NOfP chart via SBA report at 46
It's well known that, the "explosion of regulation of everything remotely connected to the use of land, air and water adds to American taxpayers’ daily burdens, increases the cost of doing business, and destroys millions of jobs, sometimes even whole industries." The SBA tabulated the total costs of such environmental regulation. Relying on OMB data, they reported high and low estimates for the cost of green rules passed in the past 10 fiscal years. I've plotted annual costs, based on the average of the estimates, converted to 2008 dollars (conversion factors here): 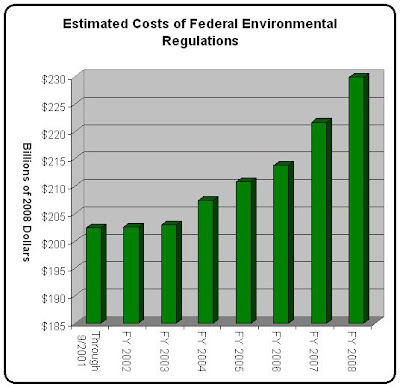 source: NOfP chart via SBA report at 26
Conclusion: Government regulations are stealth taxes. Some, perhaps most, are worth it. But 11 grand plus per family per year is a lot of money. As is nearly $230 billion annually for green rules that may bring scant benefits, so simply waste tax dollars and destroy jobs. Shouldn't we rethink the regulatory burden from the ground up?

The obvious comparison is with the Iraq war, which costs $709 billion to date. By contrast, environmental regulations since the start of FY2002 cost nearly $1500 billion. If Iraq cost too much, environmental rules are twice as expensive.

MaxedOutMama looks at the same study, observing that it finds that the costs of Federal regulation hit "small manufacturing firms" most severely and concluding that "Since we were not reeling around choking on toxic fumes in 2000, I think we can safely cut a lot of this [environmental regulation]."

Roy:
mmmm, how about from the groundwater up?

I spent at least 10 minutes on that last line -- my poor pun was intended -- yet somehow didn't think of your better line; well done!

And as PJ O'Rourke noted, at least with war we get to build cool stuff, blow things up, and kill bad guys.

Now that I think of it, 10:10 has also decided that blowing things up is also fun. Except it's good guys.

And since we need to shift back to more manufacturing to really boost the economy, and since the burden on small manufacturers per employee is immense, all the Fed is going to accomplish with QE2 is a new recession.