Charts of the Day

Remember the bogus "Hockey Stick" climate model, which predicted rapid, and seemingly irreversible, global temperature increases? At one point, Dr. Michael Mann, the model's creator-in-chief, appeared to back away from some of his model's notions. Possibly because the science underlying the model -- particularly the tree ring data used as proxies for historical temperatures -- appeared suspect.

Thanks to Steve McIntyre of Climate Audit, strike the word "appeared." With tree ring proxy models, some data likely are outliers and should be excluded. There's nothing unscientific about the process, so long as it is transparent. McIntyre now has received the complete "Yamal" dataset (through 2005), calculated temperature proxies, and compared the results to the "Climate Research Unit" 2008 supposed Hockey Stick measurements: 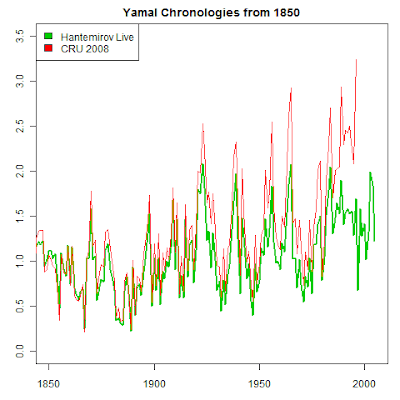 source: Climate Audit
Not quite the same Hockey Stick, is it? Or, if so, it's flipped, un-threateningly, sideways. Anthony Watts both explains and poses a question to Dr Hockey Stick:

This graph demonstrates how trees simply don’t show a hockey stick shape when all of the data is used.

In MBH98, your paper Dr. Mann, has a similar problem to the Briffa data. Your solution was to not use tree core data after 1960 and to splice on the instrumental temperature record to in effect “hide the decline” of the trees after 1960.

How do you respond to the charge that the tree ring data was cherry picked to show a desired result, and that Mr. McIntyre has falsified your work by showing that the premise of a hockey stick falls apart when all of the data is used?

Of course, Dr Mann ducked the question, calling it "specious." Similarly, Myles Allen thinks it "sad for democracy that so much energy in the debate on climate change has been expended on pseudo-debates about the science, leaving no room for public debate about the policy response." Allen goes on to say that his "fear is that by keeping the public focused on irrelevancies, you are excluding them from the discussion of what we should do about climate change." In other words, the science is settled.

Except -- whoops! -- it isn't. RealClimate -- the blog that brags to be "Climate science from climate scientists" -- just had to revise its ocean heat content graphs for prior years. It blamed the mistake on "incorrect scaling." Strange language for an error us "pseudo-debate[rs]" have known of for years. With the correction, by the way, the ocean heat rise (for 2010) looks to have flatlined a while back: 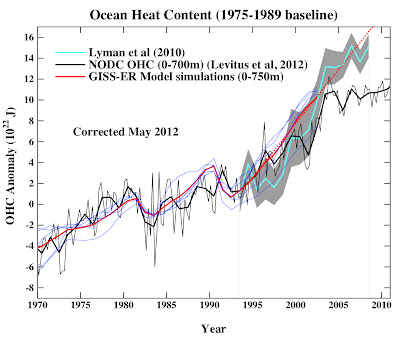 Post-modernists are skeptical about everything except skepticism. I don't know whether the earth actually is cooling. But the alarmist sure haven't shown it's worth spending hundreds of trillions against the small risk the planet might be warming. All they've proved -- again -- is that greens are crazy.