Everyone knows the globe is warming, right? Well, how much? Didn't they just announce that, in the U.S., 2010 was the fourth warmest summer ever?

That's true, but we had an unusually cold winter, so the 12-month period ending in August was the second coldest since 1998: 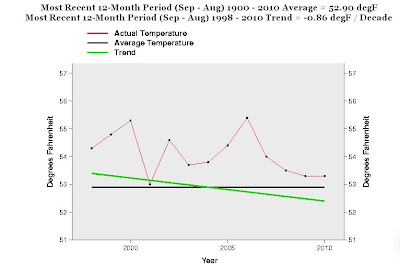 source: NOAA data for year-to-date since 1998; average line 1900-2010
Notice that U.S. temps have been declining for over a decade, and are only a bit above their 110-year average.

Luboš Motl of The Reference Frame calculates that there's only a 16 percent probability that 2010 will end up warmer than 1998. So it's too soon for certainty. But if the 5:1 odds don't pay off, Motl asks:

If 1998 remains the warmest year on record, you may wonder what is the appropriate global warming definition or the meaning of global warming that is consistent with the likely fact that 1998 will fail to be surpassed 12 times in a row.

Well, I can't speak for other areas, but I'm not even buying the "warm summer" crap.

This has been a VERY cool summer in north central florida, I don't believe we've even had a sustained high-90s pattern lasting more than a couple days, if AT ALL. And I'm fairly sure that there's been no 100-plus-degree days.

For the most part, while it's been hot, it's never been, all summer long, REALLY HOT.

My bet is they're lying through their teeth, or at least carefully stating the facts to mislead.

NOAA's map of summer temps in the U.S. is here. Set Element to "Mean Temperature"; Year to "2010" and Period to "Summer (Jun-Aug)." By that measure, Florida is listed as "Much Above Normal." Of course, I'm not vouching for the data set--given the history of "adjustment" to the raw numbers.

I just read somewhere that the White House has fixed everything: It's NOT going to be called Global Warming, now it's going to be Global Climate Disruption (this allows for it to get colder, too, you see).

Oh, that pesky CO2!!! Some years it makes us warmer, some years we get colder, and it's ALL BECAUSE WE DRIVE CARS AND USE ELECTRICITY.

"Now cut it out -- stop burning our those fossil fuels, stop damaging our fragile ecosystems", said the Ruling Class, as they all jumped into their waiting Gulfstreams to attend another climate conference.

Let's just make sure it's not "Put Al Gore in charge".

But what about this? http://climvis.ncdc.noaa.gov/cgi-bin/cag3/hr-display3.pl