Chart of the Day

The press and progressives often panic about America's economy falling behind Europe and China. Should we be alarmed? Not so fast.

On his Carpe Diem blog, econ prof Mark Perry linked to recent U.S. Department of Agriculture data on historical GDP by country. Here's my plot of GDP share (real, not PPP) by region over the past 40 years: 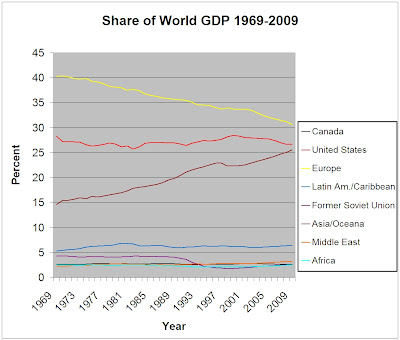 World GDP (real) doubled between 1969 and 1990, and has increased by another 60% since then, so that world output in 2009 is more than three times greater than in 1969. We might mistakenly assume that the significant economic growth over the last 40 years in China, India and Brazil has somehow come "at the expense of economic growth in the U.S." (based on the "fixed pie fallacy") but the data suggest otherwise. Because of advances in technology, innovation, and significant improvements in U.S. productivity, America's share of total world output has remained remarkably constant at a little more than 25%, despite the significant increases in output around the world, especially in Asia.

Agreed--both as to the U.S. vs. Europe and the fixed pie fallacy. And I suspect that, measured at purchasing power parity, the share of U.S. GDP might be rising.

Tracking economic trends during a recession is hazardous: after all, unemployment's up; so something's wrong; and Bush is the immortal culprit. But I'm not departing from previous conclusions: In the long run, our living standards are rising (and better than Europe); the decline in manufacturing employment stems largely from productivity increases, not free trade, and in any event is offset by increased service sector jobs. So America isn't doomed--unless by the depression Obamacare and carbon cuts will induce.

Carl, Perry's chart needs to be re-normalized to include each regions relative % of world population.

I am pretty sure that if you re-normalized the chart it would make the same point, but not as strikingly.