When Will Democrats Credit Bush?

President Bush is on a roll. By any objective measure, he's had a fantastic month: free elections in Iraq, protests in Lebanon -- leading to promises from Syria -- a nascent democratic opposition in Egypt, multi-ethnic government in Iraq, a successful swing-through in Europe, re-upping from Australia, the fashion world, if not the gossip columns, falling for Condi like white on Rice. I especially enjoyed Condi's turn on the runway, in part because it plainly refutes the liberal myth that -- deep down inside -- America's military hates this Administration and longs to return to lefty foreign policy isolation: 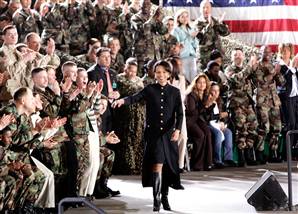 Finally: a rock star on our side! Saucy too!

Most importantly, ten days after the first signs, the Bush-haters may be reconsidering their hostility to the global war on terror. Simply put, there's a new meme in town: Bush's strategy to replace Arab dictatorship with American-style democracy is working where lefty-Euro talk-talk consistently bombed. Germany's Der Spiegel magazine -- which historically savaged the Bush Administration -- said it first, recalling a prior misjudgment:

Germany loves to criticize US President George W. Bush's Middle East policies -- just like Germany loved to criticize former President Ronald Reagan. But Reagan, when he demanded that Gorbachev remove the Berlin Wall, turned out to be right. Could history repeat itself? . .

Europeans today -- just like the Europeans of 1987 -- cannot imagine that the world might change. Maybe we don't want the world to change, because change can, of course, be dangerous. But in a country of immigrants like the United States, one actually pushes for change. In Mainz today, the stagnant Europeans came face to face with the dynamic Americans. We Europeans always want to have the world from yesterday, whereas the Americans strive for the world of tomorrow. . .

It was difficult not to cringe during Reagan's speech in 1987. He didn't leave a single Berlin cliché out of his script. At the end of it, most experts agreed that his demand for the removal of the Wall was inopportune, utopian and crazy.

Yet three years later, East Germany had disappeared from the map. Gorbachev had a lot to do with it, but it was the East Germans who played the larger role. When analysts are confronted by real people, amazing things can happen. And maybe history can repeat itself. Maybe the people of Syria, Iran or Jordan will get the idea in their heads to free themselves from their oppressive regimes just as the East Germans did. When the voter turnout in Iraq recently exceeded that of many Western nations, the chorus of critique from Iraq alarmists was, at least for a couple of days, quieted. Just as quiet as the chorus of Germany experts on the night of Nov. 9, 1989 when the Wall fell.

Over the years, I've often heard him denouncing the United States and Israel, but these days, in the aftermath of Hariri's death, he's sounding almost like a neoconservative. He says he's determined to defy the Syrians until their troops leave Lebanon and the Lahoud government is replaced.

"It's strange for me to say it, but this process of change has started because of the American invasion of Iraq," explains Jumblatt. "I was cynical about Iraq. But when I saw the Iraqi people voting three weeks ago, 8 million of them, it was the start of a new Arab world." Jumblatt says this spark of democratic revolt is spreading. "The Syrian people, the Egyptian people, all say that something is changing. The Berlin Wall has fallen. We can see it."

If a pro-U.S. voice was saying, "something big and good and important has come from the invasion of Iraq," it wouldn't be surprising. The fact that a guy who has been ripping U.S. foreign policy and espousing conspiracy theories for years is saying it is surprising. This is a genuine "man bites dog" story, and suggests that the pictures of Iraqis braving threats and voting in elections are actually changing minds out there.

I'm not expecting Jumblatt to become an all-out "Hooray for America" voice. But he's acknowledging that a good thing has resulted from the invasion, that the dictators of the Middle East are not permanent, and that the long-oppressed Arab peoples can get something better. The meme is spreading.

And that is a great thing for the U.S. and for the world.

Yes, plenty of loonies won't ever shake their conspiratorial convictions that corporate cronies caused the Iraq invasion. Plenty others worry about regional instability -- including the EU foreign policy chief. But the establishment of democracy in Iraq is inspiring millions of Muslims with televisions, says the Economist:

Syrians or Egyptians can see that real elections take place not just in rich Christian Europe, but in neighbouring Palestine and Iraq. Such innovations are no longer perhaps just for people “like them”, but for people “like us”. . .

Indeed, al-Jazeera's . . . Mr Qaradawi, its star preacher, recently excoriated a viewer who called in to his show, “Sharia and Life”, to denounce democracy and freedom as “infidel” concepts.

And the new al-Arabiya satellite TV network broadcasts a fairer picture of Iraq:

Watching their contrasting takes on November's offensive by American marines in Fallujah, for example, one might have thought they were covering different events. While al-Jazeera focused on civilian deaths and heroic resistance, al-Arabiya pictured the storming of a terrorist haven. Before Iraq's election, the Dubai channel broadcast saturation get-out-the-vote advertising, as well as a four-part exclusive interview with the interim prime minister, Iyad Allawi. While senior American officials shun al-Jazeera, President George Bush has twice granted its rival exclusive interviews.

Might Germans, Lebanese and even English Labour MPs be sharper than Democrats? So long as Dems follow Howard Dean, rather than an adult like Kurt Anderson, the answer is yes.

The Democrats aren't going to credit Bush. They really can't - politics these days is all about spin.

Yet I'll be willing to admit that I am feeling a soul-deep satisfaction that Chirac is now at least metaphysically eating his words about Arabs not wanting democracy and self-determination by taking a stance against the continued Syrian opposition. He, at least, recognizes that jig is up.

Indeed. Heh. It is probable that the center cannot hold in the long run.

But you are entirely right that the moment now is golden. It should be savored. Deeply.