America's so evil we're responsible for Tsunami deaths half a world away, according to several inbecillic Sydney Morning Herald readers:


These Australians are a revolting, if typical, example of the naive belief that world peace requires merely diverting funding for "guns" into bucks for "butter." Nonsense. By taking a leading role in the war on terrorism, the U.S. has helped make the world safer, improving quality of life worldwide--even nutty Australian liberals. And America's huge defense budget funds a strong Navy that keeps sea-lanes open, a sine qua non of global commerce--including Australian business.

President Bush is sending condolences and promising aid to those affected by the Indian Ocean earthquake that spawned massive tidal waves felt from Indonesia to Sri Lanka.

A White House spokesman says the United States will provide appropriate aid and says some relief is already on its way to Sri Lanka and the Maldives. U.S. officials say they will provide further assistance in cooperation with other countries and international organizations, including the United Nations.

(via Blograjanr, who's following the tsunami tragedy)

From IowaHawk, with a dash of Crichton:

Are Democrats merging with the UN?:

The Bush administration yesterday pledged $15 million to Asian nations hit by a tsunami that has killed more than 22,500 people, although the United Nations' humanitarian-aid chief called the donation "stingy."

"The United States, at the president's direction, will be a leading partner in one of the most significant relief, rescue and recovery challenges that the world has ever known," said White House deputy press secretary Trent Duffy.

But U.N. Undersecretary-General for Humanitarian Affairs Jan Egeland suggested that the United States and other Western nations were being "stingy" with relief funds, saying there would be more available if taxes were raised.

I thought the "black helicopter" stuff was a myth, but if they can raise American taxes, the UN really is the source of all evil.

The international response to a catastrophic tsunami in Asia has been quick and generous, a senior U.N. official said on Tuesday, playing down his earlier comments that wealthy nations were stingy.

U.N. Emergency Relief Coordinator Jan Egeland rowed back from statements he made on Monday after an annoyed Secretary of State Colin Powell said Washington was "the greatest contributor to international relief efforts in the world."

[The Norwegian Egeland continued,] "It has nothing to do with any particular country or the response to this emergency. We are in early days and the response has so far been overwhelmingly positive," he said.

"The international assistance that has come and been pledged from the United States, from Europe and from countries in the region has also been very generous," Egeland added.

Countries have contributed or pledged tens of millions of dollars in the first few days after the disaster.

The United States provided an initial $15 million mostly channeled through the International Federation of the Red Cross and Red Crescent, plus logistical support for aid efforts. On Tuesday, the U.S. Agency for International Development added $20 million for the earthquake relief, a White House spokesman said.

Since he's incapable of comprehending the real world, I recommend the UN send Egeland back to Norway. Alternatively, perhaps the Democrats should nominate him for President in '08.

[I]t is one thing to say the victims need more help, and another thing entirely to suggest that Sri Lankans and Indonesians are suffering from the stinginess of Americans or U.S. tax policy.

Let's review the obvious: The United Nations is an odious institution. Whenever I make this commonsense observation, I am invariably rebutted with questions like, "What about the starving people it feeds?" or "What about the peacekeeping?"

The United States supplies more than one-fifth of the United Nations' total budget (and 57 percent, 33 percent and 27 percent of the budgets for the World Food Program, the Refugee Agency, and Department of Peacekeeping Operations, respectively). We've been the United Nations' biggest donor every year since 1945. Taxpayers reluctantly agree to such largess because we're told of the good works the United Nations does. And yet, whenever there's a catastrophe, Uncle Sam is asked to dig deep into his pocket for more money.

The problem is that the United Nations is not an impartial philanthropic organization. It is a political institution where a broad coalition of nations hope to curtail the power and influence of the United States. France uses the organization to leverage its relatively meager power by rallying African and Arab nations against us. Kofi Annan uses his megaphone to decry the moral and legal legitimacy of American foreign policy. Its Human Rights Committee is festooned with torture states, but it seems capable of issuing only condemnations inconvenient to the United States. And we foot the bill.

This is the Catch-22 of the United Nations. Politically, it's often reprehensible and inimical to American interests. But we're never asked to pay for that stuff. This comes out of the general budget. It's only when human beings are suffering in vast numbers that we're shamed for being "stingy" — because the United Nations understands how to exploit America's decency. If only we could be shaken down for more money to pay the light bill in the General Assembly when they play whack-a-mole with the United States.

Charles Johnson at LGF has two tables showing the U.S. aid budget (both in percentage of growth national income and in total dollars); data is from the Organization for Economic Cooperation and Development: 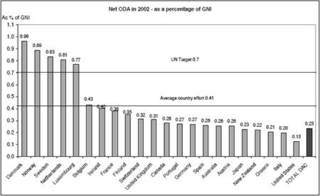 As a percentage of Gross National Income (click to enlarge) 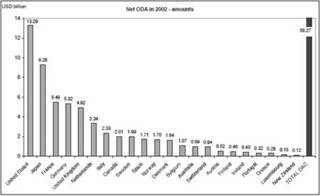 Doesn't look so stingy anymore does it? Indeed, the OECD numbers don't even include food aid:

And the grinches are especially crazy since all these amounts don't include monies from private non-governmental charities, which dwarf government aid--"more than three and a half times the amount of official development assistance (ODA) given out in a year by the U.S. government"--but barely exist outside the Anglosphere.

I guess there are as many ways to calculate "aid" as there are to calculate "love of country." According to the Organization for Economic Cooperation and Development, in 2003, the U.S. gave $37.8 billion out of a total $108.5 billion in foreign aid from the world's major countries – notable for being more than three times the amount from the next largest donor, the Netherlands, clocking in at $12.2 billion. Americans make up about 5 percent of the world's population and give about 35 percent of the aid. . . .

At a minimum, in order to discount the largesse of the United States, one must carefully exclude gigantic categories of aid, such as military aid, food aid, trade policies, refugee policies, religious aid, private charities and individual giving.

The Hits Just Keep on Coming:

Carl, hopefully you would not be speaking of all Aussies?
But when looking closer i see its written "These Australians" indicating only those people.

What do you think about the rest of us?
I would have you know i totally respect all American people, no matter of their opinion. Only exceptions would be total extremists.

"These Australians" are "imbecil[es]." And the issue isn't whether I "respect" such opinions. I respect the right of anyone, no matter how idiotic, to express their opinion. The problem is that the opinion of these Aussies is wrong. How do I know it's wrong? Because I say so--and that's good enough for me.

Outside of liberal--the Aussie variety appears crazier than most--Australians are great. Great people, great drinkers, great soldiers and great companions. I miss the now-discontinued Australian tradition of having a "telecom" attache at their embassy in Washington--my drinking life suffered greviously when they eliminated that position three years ago.