In January, I detailed unrealistic mandates for "cellulosic biofuel" imposed by statute. Because Congressmen are lousy scientists, it turned out that "establishment costs, as well as collection, storage, and transportation costs, associated with the production of bulky biomass crops are likely to be more challenging than originally thought." Congressional Research Service, Cellulosic Biofuels: Analysis of Policy Issues for Congress at 3 (Jan. 13, 2011). Moreover, "[b]reaking down cellulose and converting it into fuel requires complex chemical processing--technology that is now rudimentary and expensive. . . [A]t the present time processing cellulose into fuels is expensive relative to other conventional and alternative fuel options." Id. at 9. (This despite a $350k grant awarded by EPA in 1997 to commercalize a "breakthrough" genetically engineered yeast that would convert cellulose to ethanol. The EPA gave a 2008 "Youth Award" to a New York state high school student for a seemingly similar project--at least it was cheaper!)

Unsurprisingly, therefore, refiners produced exactly zero gallons of cellulosic biofuel in 2011. 77 Fed. Reg. 1320, 1323 (Jan. 9, 2012). More surprisingly -- at least to those familiar with the meaning of due process -- oil companies were required to pay millions of dollars in "waivers" for failing to meet the mandates. Even the New York Times called this a euphemism for a "fine" and "penalty."

Back in 2008, the EPA predicted (link in .ppt) that "Cellulosic biomass will be the primary source for fuel ethanol." The agency still believes its press releases. Yet, according to MIT's Technology Review, "[t]he corn ethanol industry is booming, but cellulosic biofuel production is far behind schedule." 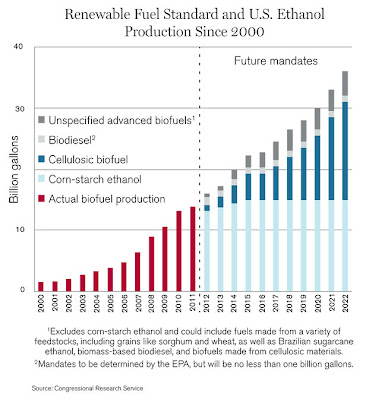 In 2012, the EPA posits--based on its analysis of the six facilities scheduled to come online this year--that the fledgling industry will have the capacity to produce nearly 10.5 million gallons, compared to the original goal of 500 million. . .

Several more facilities should begin commercial production in 2013, but it's hard to believe that the industry will come even close to producing a billion gallons--the goal for that year, set by Congress in 2007. And the 2022 mandate of 36 billion total gallons of biofuel--16 of that cellulosic--is looking more unrealistic every year.

Not that the oil companies won't pay fines. . . I mean buy waivers. Someone has to pay for misplaced green zealotry, and it's never Congress or the EPA--it's oil companies and, thus, their customers. Which (for those now occupying some public park) means us.

I'm all in favor of paying for Congress and the EPA...
as long as that involves paying for the bullets to have them lined up against a wall and shot. :-/

Can we identify them as Tories and ship them back to England? It's not like the Brits will notice the difference.

[My mother was easily frustrated by governmental idiocies back in her day; she kept horrifying my placid, easygoing father when they were watching the evening news by shouting to the TV "Just line them up and shoot 'em!!" --OBH, are you the secret brother I never heard about? ]

At any rate, to keep governmental expenses down, I suggest we set up a voluntary fund (oh, call it "Bullets For Bozos") that frustrated taxpayers can contribute to, thus defraying the costs of ammo.

After all, there ARE a lot of "Bozos" out there who (harking back to B-grade Westerns) "needs killin'".


PS- for the "please prove you're not a robot" captcha, WHY must they contort the letters to the point they're unrecognizable as being from the English alphabet?

>>> OBH, are you the secret brother I never heard about?

Only in spirit, me boyo, I'm pretty certain of my provenance :^D

NOW, as to yours, I make no promises, my father was quite the ladies' man as I understand, which led to my mother leaving him at an early age for me... ;-D

If you are not familiar with Assassination Politics, it should amuse you to no end to know that it scared the absolute apeshit out of the political elites, and they stomped on the idea's early progenitor/promoter, Jim Bell with both feet.