Chart of the Day

I've previously shown that American measures of poverty over-estimate the population of the poor and under-state their material improvement. On his Carpe Diem blog, econ prof Mark Perry spots a 2006 Bureau of Labor Statistics chart clearly illustrating the point: 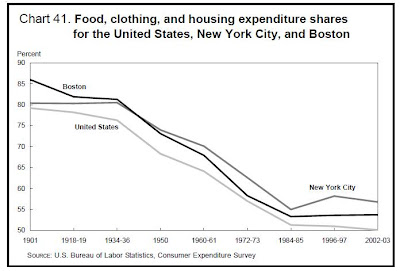 The material well-being of families in the United States improved dramatically, as demonstrated by the change over time in the percentage of expenditures allocated for food, clothing, and housing. In 1901, the average U.S. family devoted 79.8 percent of its spending to these necessities, while families in New York City spent 80.3 percent, and families in Boston allocated 86.0 percent. By 2002-03, allocations on necessities had been reduced substantially, for U.S. families to 50.1 percent of spending, for New York City families to 56.7 percent, and for Boston families to 53.8 percent. . .

Of course, most of the poor don't stay poor. And today's poor are better off than ever before. Not that the left ever will acknowledge the poverty reduction effect of free market capitalism.
Posted by @nooil4pacifists at 11/22/2009 12:01:00 AM