Last month I quoted an article about the problems with Veterans Administration healthcare. Since then, I've run across ample additional anecdotal data, such as what even the New York Times called a "Rogue Cancer Unit" at the Philadelphia VA hospital, botched colonoscopies, and political shenanigans at the VA in Pittsburgh.

But most informative yet is a Congressional Budget Office interim report on veterans health care, with data through 2007. The VA classes patients into eight "priority groups" depending on the degree of disability, income and age. The key fact is that the Veterans Health Administration doesn't say much about single payer or a public option because veterans today receive most of their healthcare outside the system, as Cassandra of Villainous Company summarizes:

In other words, the bulk of their health care needs are met outside the VA system. As you can see from the following chart, which broadly summarizes data reported here, the VA is NOT the primary health care delivery system for most vets: 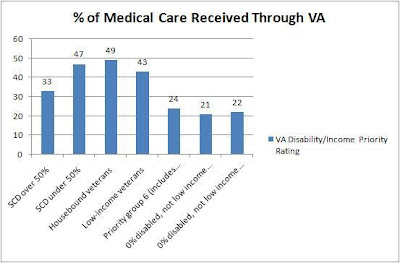 Nearly 80 percent of enrolled veterans have access to other health care coverage, and data from VHA indicate that most enrollees with other coverage rely on VHA for only part of their medical care. Veterans are particularly likely to turn to VHA for outpatient care and for certain services--such as mental health and substance abuse counseling--on which VHA has put particular emphasis and for which many veterans may not have private coverage. Most enrollees rely on other providers for emergency services and inpatient hospital care. Enrollees may choose one provider over another for various reasons, including travel time, out-of-pocket costs, and perceived quality of care for a particular type of service.

There's dispute over whether veterans get timely and effective treatment -- the CBO cites longer-than-reported wait times, and a 2006 Rand study found a lower quality of VA care than reported in subjective patient satisfaction surveys. (As Megan McArdle reminds, didn't we discover flaws in Walter Reed?, an Army, not VA, hospital, but nonetheless government-run.) But, even were the system working, the Veterans Administration is a supplemental, not primary care, provider -- and thus no model for Obamacare.

By the way, health reform progressives also should learn from the Indian Health Service, a Federal government single-payer system providing sub-standard and under-funded care to native Americans. Before enacting a sweeping new system, why not fix IHS and Medicare first?