Main-Stream Media: Playing 'Its a Coup' on the Hurdy-Gurdy 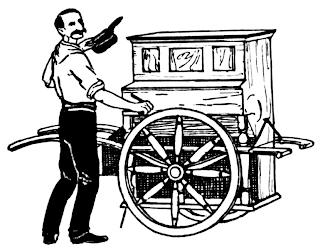 The so-called main-stream media can only grind out the same old tune 'Its a Coup --Its a Military Coup' about Honduras, and the world apparently does some kind of knee-jerk monkey dance begging for 'Democratic Rule' to be restored.

However, the truth is that democracy rules apparently only in Honduras. Both the entire Honduran Supreme Court and the entire elected legislature acted unanimously. Etonomic.com has a great write up of the legal and political situation in Honduras which I feel compelled to quote at length. Emphasis mine.

In March of this year, Zelaya issued a presidential decree ordering that a fourth ballot box be included with the typical three used in this year’s Novemember elections... The Supreme Court of Honduras declared this fourth ballot box, and this means of creating a new Constitution, unequivocally unconstitutional.

Mr. Zelaya ordered the armed forces to carry out and secure the referendum. The heads of the armed forces refused pursuant to the law passed by the National Congress. Zelaya attempted to fire Gen. Romeo Vasquez Velasquez, the top commander. The Honduran Supreme Court ruled 5-0 on June 25th that the firing was unconstitutional and ordered the general’s reinstatement. The Supreme Electoral Tribunal, tasked by the Constitution to rule on the validity of elections, further ruled on June 25th that the refendum itself was illegal.

Zelaya then gathered a large mob together and marched on the location where the military was keeping the ballots that Chavez had shipped in. The mob seized the referendum ballots for Mr. Zelaya and Mr. Zelaya sought to continue the referendum. Finally, on the morning of the referendum – Sunday, June 28th – Mr. Zelaya’s residence was raided by the military and he was exiled from the country.

Subsequent to this action, the Supreme Court of Honduras stated that it had asked the military to exile Mr. Zelaya. Additionally, the National Congress voted to ratify the actions of the military in exiling Mr. Zelaya and to confirm the President of the National Congress as his successor, pursuant to Article 242 of the Constitution ... The vote to confirm [Micheletti] as successor to Mr. Zelaya was done by a show of hands in the National Congress and was UNANIMOUS. A pretty incredible fact considering that Zelaya’s Liberal Party is still in power. The vote was done on the premise that Mr. Zelaya had performed “repeated violations of the constitution and the law and disregard of orders and judgments of the institutions.”

On the status of Mr. Zelaya himself -- he is no longer a citizen of Honduras!

Article 42 of the Constitution declares that anyone who seeks to have the President continue as President or reelected as President automatically loses their Honduran citizenship. Ouch. Additionally, anyone who proposes reform to the four-year limitation in general loses their current position and cannot hold a public position for ten years. Ouch. These are clearly reflections of the historically dictatorial nature of Latin America. In other words, Zelaya was clearly trying to do both of these things and as such lost his citizenship and office. Note that both of these things occur automatically without any action on anyone’s parts.

Continuing our round-up, the WaPo published a coherent letter (from high profile attorney Miguel Estrada), highly critical of the WaPo opinion on the Honduran Situation:

Manuel Zelaya was duly elected four years ago on the ticket of the Liberal Party, the center-left party in Honduras. (I attended his inauguration as part of the United States' official delegation). Mr. Zelaya was never, and never pretended to be, center-right, as the editorial asserted. And Honduran voters presumably expected him to govern from the left, as indeed he did.

As the editorial correctly noted, the Honduran Congress -- led by Mr. Zelaya's own party -- overwhelmingly voted to remove Mr. Zelaya from office because of his malfeasance. It appointed a successor, again in apparent compliance with the country's constitution, as your editorial seemed to concede. How then could you advocate -- in the name of defending democracy, no less -- that the United States work to reinstate Mr. Zelaya? We in the United States also have a legal process for removing our president. We have used it twice, though never successfully. Were we successfully to impeach and remove a president, would we accept the judgment of, say, France directing that he be reinstated?

I'm not sure I really want to hear the WaPo answer to that question. (Emphasis mine.) Mr. Estrada continues a now familiar theme:

It is readily apparent why Mr. Chávez is, even now, attempting to rally his acolytes (and possibly troops) to restore Mr. Zelaya. It is less apparent why a Post editorial should urge our government to follow his lead. If we want to "defend democracy," we should side with the Honduran people who are rightfully insisting that their leaders honor their constitution, not that of Venezuela.

In addition to having been nominated to the federal appeals court in DC but was filibustered by the dems, Miguel Estrada was born and raised in Honduras. WaPo also published another letter critical of the WaPo, this one from a former Honduran Ambassador to the United States:

Honduran democratic institutions are working to protect the constitution from the political and social groups trying to shred it. They should be recognized for their commitment to the rule of law, not punished with non-recognition by the United States, the world's foremost democracy.

I am certain that the U.S. government will quickly realize that what happened in Honduras cannot be compared with past military coups in Latin America. Our new president, Roberto Micheletti, should be supported in his commitment to hold general elections in November and to hand over power to a newly elected government.

He might be certain, but I'm not so sure. However, I have to give the WaPo some credit for at least printing these letters. They need to retract their knee-jerk inaccurate op-ed piece and start asking the President why he is supporting a would-be-dictator. The Washington Post is still apparently too busy recovering from SalonGate to do something truly worthwhile.

The Honduran Miracle -- (but you didn't hear it from the MSM)

Dennis Prager, who I read in my home-town newspaper The Daily Breeze completes our round up today:

The courage of the pro-liberty forces in Honduras is almost miraculous. It is almost too good to be true, given Honduras' consequent isolation in the world.

The most amazing thing is that the American people have to read letters to the editor, out-of-the-way op-ed pieces, and in our tiny blog to find out about the miracle! Why is that? The President should be telling us about the miracle. Except, he isn't. So now we have to ask why is President Obama not telling us the whole story? Where is the 'do our business in the light of day' he promised? Is he too dancing to the MSM Hurdy Gurdy? Prager continues:

When did a military coup ever take place that was ordered by that country's supreme court, that was supported by the political party of the president who was overthrown, in which not one person was injured, let alone killed, and which replaced the ousted the president with the president of the country's congress, a member of the same party as the ousted president?

But none of this matters to the United Nations, which never met a left-wing tyrant it didn't find appealing. That is why the president of the U.N. General Assembly, a former Sandinista foreign minister, Miguel d'Escoto Brockmann, accompanied Zelaya in the airplane on Zelaya's first attempt to return to Honduras on July 5. (Brockmann, among his other radical moral positions, is so virulently anti-Israel that the Israeli Ambassador to the United Nations threatened not to attend the U.N. Holocaust Memorial Day event if Brockmann showed up.)

And none of this matters to the OAS, which just lifted its ban on Cuba's membership and which says nothing about Chavez's shutting down of Venezuela's opposition radio and television stations.

And none of this matters to the world's left-wing media. Thus, on July 1, a writer for the United Kingdom newspaper The Guardian penned this insight: "There is no excuse for this coup. The battle between Zelaya and his opponents pits a reform president who is supported by labor unions and social organizations against a Mafia-like, drug-ridden, corrupt political elite." To the Guardian writer, Zelaya was a "reform president."
Lenin's useful idiots never die out.

And the Los Angeles Times editorial page wrote: "Even though the Honduran Congress and military may believe they are defending the country against a would-be dictator, the ends don't justify the means."

Quite a great deal of foolishness in one sentence. That the Los Angeles Times does not believe that Zelaya is a would-be dictator is mind-numbing. As for the cliche that "the ends don't justify the means," in fact they quite often do. That is one of the ways in which we measure means. One assumes that while the Los Angeles Times believes that Americans should be law-abiding, it agrees with Rosa Parks having broken the law. The ends (fighting segregation) justified the means (breaking the law).

Why are the left-stream-media organ grinders influencing opinion of world leaders? Or is it the other way around? Please call or write your newspaper and ask them why President Obama proposes to put the would-be-dictator Zelaya in charge of Honduras. Ask the media why they are not actually reporting what is going on in Honduras. Moreover, ask them why President Obama is hiding behind Hugo Chavez.

As long as we put up with this nonsense from the so-called MSM we will only have the option to listen to the same, repetitive clown college theme-song.

(H/T to reader and guest contributor OBloodyHell for bringing the excellent Etonomic.com article to my attention, and to reader Doug J. for the WaPo letters. Thanks.)

MORE: As pointed out by the Other McCain, Fausta continues to be the Honduran crisis reference of choice.

STILL MORE: Must see Senator DeMint questioning the giant disappointment of a nominee for the Assistant Secretary of State position, Mr. Valenzela. He flp-flops quite badly he first says (at 9:10) "This was a classic... ah ... ah military coup." and in the next breath "I wouldn't call it a military coup..." This, in addition to other blunders like "I'm not familiar with all the details..." I could do an entire article here exploring Mr. Valenzeula's nomination to find out who is grinding his hurdy-gurdy.
Posted by Bob Cosmos at 7/09/2009 03:00:00 PM

Estrada has an op-ed in today's LA Times.

In Estratda's LA Times op-ed, that you link to, he notes that all the Honduran Bishops support the Michelletti Government. This is huge for Honduras, where well over 90% of the population are deeply religious and belong to the Catholic church. The church in Latin America is as ingrained with the culture as apple pie is in our country. The people will support whatever the Bishops do.