Here's something Obama wasn't planning on stimulating: handgun and military weapon sales -- up dramatically. They are not buying hunting rifles, and this isn't a knee-jerk reaction to gun-control alarmism.

People are arming themselves:

Gun sales shot up almost immediately after Barack Obama won the U.S. presidential elections on November 4 and firearm enthusiasts rushed to stores, fearing he would tighten gun controls despite campaign pledges to the contrary.

After the November spike, gun dealers say, a second motive has helped drive sales: fear of social unrest as the ailing economy pushes the newly destitute deeper into misery.

Ruger handgun sales are up 42%. Smith and Wesson handgun sales are up 46%, driving a rare positive surprise on Wall Street as they beat expectations by 150%. And it isn't hunting rifles people are buying, either: "SWHC's hunting business is being negatively impacted by the economic downturn, but the company continues to selectively invest in the business while focusing on reducing the cost structure." 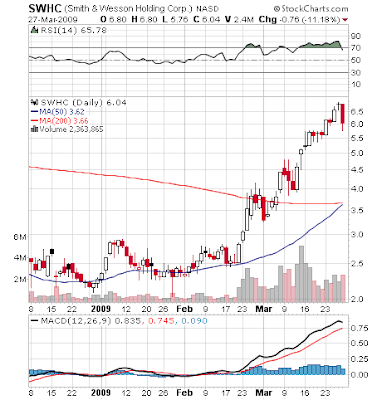 Mr. Market also has something to say, and it says people are going to continue to buy handguns.

Here is the chart for Smith and Wesson. Ruger's chart is nearly identical.

I'm going to go out on a bit of a limb here -- there is a causal relationship with the street reaction to the porkulus bill -- the street is betting the gun business will be robust. People are going to continue to arm themselves.

Speaking of personal protection, I prefer the FMG9. "Gets nasty? Get down to business."

(H/T to The Yeoman Farmer)

Our "bitter-clinger" reaction is hardly surprising - especially since we're paying attention to things like this:

Finally! Some economic news people can be happy about!!

fear of social unrest as the ailing economy pushes the newly destitute deeper into misery.

That's what did it for me - back in the autumn of 2007, when Hank Paulson was closeted with Citibank, JP Morgan and others trying to hide the off-balance-sheet catastrophes known as SIVs. Between what I was reading online, and the vision of government and big banks "working together", I could see tons of "downside risk" (as Bernanke would put it).

I'd gone 52 years without seriously wanting a gun, up until that point.

Oh, and one of the things Obama has been very consistent about in his career is his affection for anything anti-gun, no matter how silly or vile. His "support" for the 2nd amendment is an evil joke - one of the reasons I ended up voting for McCain.