President Obama is committed to healthcare reform. Especially with the exit of the President's first choice for HHS secretary--former Senator Tom Daschle, who withdrew his quest in the face of nonpayment of taxes--some of the momentum for reform has been lost (though a $600 billion-plus healthcare "down payment" was included in Obama's budget). With the recent nomination of Kansas Governor Kathleen Sebelius for HHS, the desire for action is accelerating. What might the Administration do?

Given the left's obsession with universal insurance coverage, Obama's looking at the "Massachusetts model." Lefties love that state's approach to healthcare, especially as it was a signature accomplishment of Republican former governor Mitt Romney (though the Massachusetts Legislature overrode several of Romney's attempt to trim the plan; that didn't stop single-payor advocates from complaining the result wasn't radical enough). I wasn't a fan of Romney's healthcare policy, and before enshrining it nationwide, it's worth asking whether Massachusetts' now-three year-old health insurance scheme (summary here) has been a success.

There have been sporadic stories and research highlighting the uncontrollable costs, inequity, increased wait-times, and strain on the system caused by the Massachusetts policy. A January editorial in the DC Examiner said:

According to Dr. Paul Hsieh, a physician and founding member of Freedom and Individual Rights in Medicine, 43 mandatory benefits -- including those that many people did not want or need, such as in vitro fertilization -- raised the costs of coverage for Massachusetts residents by as much as 56 percent, depending upon an individual’s income status. So much for "affordable" health care.

Small businesses with more than 10 employees were required to provide health insurance or pay an extra fee to subsidize uninsured low-income residents, yet the overall costs of the program increased more than $400 million -- 85 percent higher than original projections. To make up the difference, payments to health care providers were slashed, so many doctors and dentists in Massachusetts began refusing to take on new patients.

"Yes," I hear you say, "but The Examiner is conservative." Sure--but a similar critique appeared on the front page of Monday's New York Times:

To make it happen, Democratic lawmakers and Gov. Mitt Romney, a Republican, made an expedient choice, deferring until another day any serious effort to control the state’s runaway health costs.

The day of reckoning has arrived. Threatened first by rapid early enrollment in its new subsidized insurance program and now by a withering economy, the state’s pioneering overhaul has entered a second, more challenging phase.

Thanks to new taxes and fees imposed last year, the health plan’s jittery finances have stabilized for the moment. But government and industry officials agree that the plan will not be sustainable over the next 5 to 10 years if they do not take significant steps to arrest the growth of health spending.

With Washington watching, the state’s leaders are again blazing new trails. Both Gov. Deval Patrick, Mr. Romney’s Democratic successor, and a high-level state commission have set out to revamp the way public and private insurers reimburse physicians and hospitals.

They want a new payment method that rewards prevention and the effective control of chronic disease, instead of the current system, which pays according to the quantity of care provided. . . 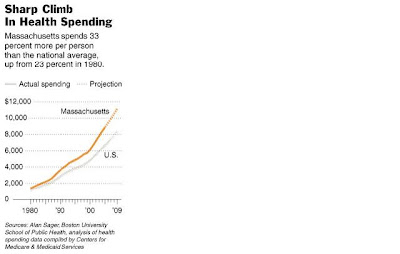 Some health policy experts argue that changes in payment practices will not be enough to slow the growth in spending, even when combined with other cost-cutting strategies. To truly change course, they say, the state and federal governments may need to place actual limits on health spending, which could lead to rationing of care.

Massachusetts has significantly reduced the number of people in the state who lack health insurance. However, it has not achieved, nor does it expect to reach, universal coverage. (The best estimates suggest that more than 200,000 state residents remain uninsured). And, significantly, roughly 60 percent of newly insured state residents are receiving subsidized coverage, suggesting that the increase in insurance coverage has more to do with increased subsidies (the state now provides subsidies for those earning up to 300 percent of the poverty level or $66,150 for a family of four) than with the mandate.

The cost of those subsidies in the face of predictably rising health care costs has led to program costs far higher than originally predicted. Spending for the Commonwealth Care subsidized program has doubled, from $630 million in 2007 to an estimated $1.3 billion for 2009.

Conclusion: Some changes to healthcare and/or health insurance would be both simple and hugely beneficial--especially severing the link between employment and health insurance, which would increase competition and help keep prices down. But the supposed increased population and morbidity of the uninsured is overstated. And, it's impossible to avoid rationing healthcare (whether by money, technology or queue) to some extent. What we must avoid is paying the same or more for less.

Already, the President exaggerated the need for radical healthcare reform, as even the media concedes. Yet, such rhetoric could be used to re-create the panic that stampeded passage of the stimulus package and budget. The monetary costs of such "reform" could crush us; the decreased choice and care could kill us.

My favorite Massachusetts heathcare reform is the creation of an on-line website for medical cost and quality data--but that necessitated little funding. With the Administration seemingly against cost control, it's easy to foresee repeating the Massachusetts mistake--expanding coverage before addressing cost control while praying for a miracle. On that path lies Great Britain.
Posted by @nooil4pacifists at 3/19/2009 12:01:00 AM

As a fried of mine likes to say "I don't necessarily disagree".

But I still think you confuse the socialism/private debate with the issue of total spending when the two are really different issues. To the extent you do this, you make the same type of error that liberals make (confusing universal access and personal desire for better care with the notion that we can do such a thing AND spend either less money on health care as a society or that spending more money on health care will not actually increase mortality as it crowds out other types of spending which might have a better bang for the buck).

Clearly the money was too low in the UK. But it is also clear that the big increases in the last 15 years have made a major improvement.

I don't think I'm mixing those issues. The question remains whether increased government control or increased competition better delivers high-quality healthcare at reasonable prices. I think that reducing the role of government--by revenue neutral elimination of the tax deduction for employer-sponsored health insurance--would be most effective.

BTW, an example where funding increases in the U.K. still resulted in appalling care.