Photos of the Day 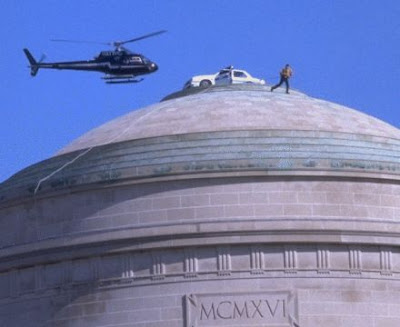 Actually, Carl, that photo and the description don't indicate the full depth and breadth of that prank.

The mockup campus police car was placed there in the dead of night, overnight, complete with flashing lights. People noticed the flashing lights early in the morning. That's the depth.

The breadth of the joke is that, although it isn't visible in the picture, there is a dummy in the drivers' seat wearing a police uniform.

... and there's a box of doughnuts on the seat beside him.

Here's the details from the MIT site:
http://hacks.mit.edu/Hacks/by_year/1994/cp_car/

Nightwork: A History of Hacks and Pranks at MIT


As well as this similar piece, which details the CalTech McDonalds Contest Prank, and has some overlap with yours:

I'm also tempted to hunt up "If At All Possible, Involve A Cow", by Neil Steinberg -- a history of college pranks.

Also, and BTW -- have you seen reference to The Eudaemonic Pie?

It's not precisely a college prank or a hack, but it's close.

A collection of very brilliant computer types decided to create for themselves a pair of computers which would fit into their shoes -- back when microcomputers were still brand new. They created a state of the art device that allowed them to get as much as a 44% advantage at the Roulette wheel, by using the physics behind roulette to grant them a consistent advantage in guessing where the ball would wind up.

One of them, named Doyne, was one of those whose name is associated with the early development of what we now call Chaos Theory. The rest were equally brilliant.

It doesn't have the same sort of utter pointlessness (beyond that of a joke or fun poking at pretentious windbags) of most hacks and pranks, but it is of the same sort of genius and inspiration.