Item - According to the Wall Street Journal:

[M]any involved in drafting and approving the NIE were not intelligence professionals but refugees from the State Department, brought into the new central bureaucracy of the director of national intelligence. These officials had relatively benign views of Iran's nuclear intentions five and six years ago; now they are writing those views as if they were received wisdom from on high. In fact, these are precisely the policy biases they had before, recycled as "intelligence judgments."

Item - According to the New York Sun :

One could call all this revenge of the bureaucrats. Vann Van Diepen, one of the estimate's main authors, has spent the last five years trying to get America to accept Iran's right to enrich uranium. Mr. Van Diepen no doubt reckons that in helping push the estimate through the system, he has succeeded in influencing the policy debate in Washington.

Item - According to Pundita, "Thomas Fingar is no more suited for US threat analysis work than Miss Beazley."

Item - As noted by Free Frank Warner, in February 2001, Fingar (then Acting Assistant Secretary of State for Intelligence And Research) said this before the Senate Select Committee on Intelligence:

[A]lthough the basic understanding of nuclear weapons physics is widespread, nuclear weapons are, fortunately, the most difficult kind to produce or acquire. Access to fissile material is a critical impediment.

At a briefing on Thursday, Thomas Fingar, deputy director of national intelligence for analysis, said the official view of the intelligence agencies remained that Iran was unlikely to have nuclear weapons before 2010 at the earliest. But he also acknowledged that the mistakes made in assessing Iraq's capabilities had made the intelligence agencies far more cautious about delivering definitive assessments to President Bush.

But on Iran's progress toward nuclear weapons, he said, there has been virtually no dissent. "Certainly none that has surfaced," he said, "and this is a question we revisit all the time."

Item - As reported by The Weekly Standard :

[O]n July 11, 2007, roughly four or so months prior to the most recent NIE’s publication, Deputy Director of Analysis Thomas Fingar gave the following testimony before the House Armed Services Committee (emphasis added):

Iran and North Korea are the states of most concern to us. The United States’ concerns about Iran are shared by many nations, including many of Iran’s neighbors. Iran is continuing to pursue uranium enrichment and has shown more interest in protracting negotiations and working to delay and diminish the impact of UNSC sanctions than in reaching an acceptable diplomatic solution. We assess that Tehran is determined to develop nuclear weapons--despite its international obligations and international pressure. This is a grave concern to the other countries in the region whose security would be threatened should Iran acquire nuclear weapons.

This paragraph appeared under the subheading: "Iran Assessed As Determined to Develop Nuclear Weapons." And the entirety of Fingar’s 22-page testimony was labeled "Information as of July 11, 2007." No part of it is consistent with the latest NIE, in which our spooks tell us Iran suspended its covert nuclear weapons program in 2003 "primarily in response to international pressure" and they "do not know whether (Iran) currently intends to develop nuclear weapons."

Item - Historically, we have failed to predict additions to the nuclear weapons club, suggesting skepticism about the new NIE is warranted.

"It's apparently true that in 2003 Iran stopped pursuing its military nuclear program for a time. But in our opinion, since then it has apparently continued that program," Defense Minister Ehud Barak told Army Radio.

Item - If Iran quit bomb-building half a decade ago, why did it block International Atomic Energy Agency inspections required under its commitments to the Nuclear Non-Proliferation treaty? As President Bush said Wednesday:

It is clear from the latest NIE that the Iranian government has more to explain about its nuclear intentions and past actions, especially the covert nuclear weapons program pursued until the fall of 2003, which the Iranian regime has yet to acknowledge. The Iranians have a strategic choice to make. They can come clean with the international community about the scope of their nuclear activities and fully accept the longstanding offer to suspend their enrichment program and come to the table and negotiate, or they can continue on a path of isolation.

No less odd is the NIE's conclusion that Iran abandoned its nuclear weapons program in 2003 in response to "international pressure." The only serious pressure we can recall from that year was the U.S. invasion of Iraq. At the time, an Iranian opposition group revealed the existence of a covert Iranian nuclear program to mill and enrich uranium and produce heavy water at sites previously unknown to U.S. intelligence. The Bush Administration's response was to punt the issue to the Europeans, who in 2003 were just beginning years of fruitless diplomacy before the matter was turned over to the U.N. Security Council.

It is folly on [Democrat Senator] Byrd's part to credit the international community with Iran backing down.

The only thing that changed in 2003 was that we put 100,000-plus troops in the nation to the west of Iran. This was on top of the troops we placed in the nation north of Iran.

[T]he real issue is not Iran's nuclear weapons program, but its nuclear program, period. As the NIE acknowledges, Iran continues to enrich uranium on an industrial scale--that is, build the capability to make the fuel for a potential bomb. And it is doing so in open defiance of binding U.N. resolutions.

Conclusion - Iran's longstanding policy and wide-ranging actions are contrary to U.S. interests. America's national security depends on readiness to counter the risk posed by the capabilities of potential foes--something we forgot sixty-six years ago today.

The publication of an unclassified version of the NIE, which concludes that Iran is "probably" not working on a nuclear weapon at this time, has triggered unintended consequences. Iran's diplomatic hand is strengthened, while foreign diplomats and officials who have pushed their governments to join the U.S. campaign of sanctions and international condemnation are suddenly undermined. "We will be exposed to a lot of criticism at home now," one official from the developing world glumly told me shortly after the estimate was issued.

"They won't say it, but our leaders must be devastated by the way this was handled," an Israeli friend said. "Not by the facts of the report, which can be discussed reasonably, but by the presentation and interpretation of the report. This happens when intelligence agencies become traumatized by previous mistakes and overreact the other way the next time."

Domestically, the most significant fact about the NIE is its public manifestation. The White House was powerless to prevent publication of a document that made Bush aides unhappy and uncomfortable. The administration went along because it knew that the document -- and any attempt to suppress it -- would have been immediately leaked.

As Gateway Pundit reports, students at Tehran U. haven't given up on freedom and democracy: Hundreds staged renewed protests on Sunday, denouncing President Mahmoud Ahmadinejad. The students

burned a copy of Kayhan newspaper, the mouthpiece of the clerical establishment that is bitterly critical of the Iranian reformist movement, [the FARS news agency] said.

According to IRNA, anti-riot police were stationed outside the campus but did not intervene.

There has been a string of demonstrations at Tehran universities in past months as students protest against the replacement of liberal professors, pressure on activists by the authorities and the detention of three students.

The demonstration on Sunday was at least the second within a week at Tehran University after dozens of students held a similar protest on Tuesday.

"Ahmadi-Pinochet, Iran will not become Chile!" chanted the protesters, playing on the names of the Iranian president and late Chilean dictator Augusto Pinochet, Fars reported.

Pictures published by the student ISNA agency showed the students crowded round the main gate and bending back its iron railings to allow others through.

A dense crowd of hundreds of people then gathered inside the university grounds for the protest, the pictures showed. "Live Free or Die," read one of the banners. 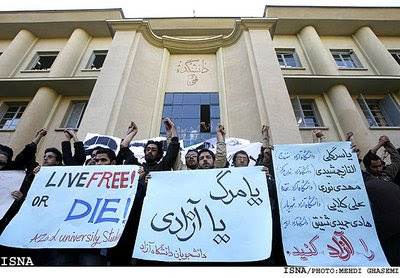 [T]hose English language signs and banners that students carry with them means that the students inside of Iran want foreign press coverage and want the foreign observers to know what's going on in that country occupied by the mullahs. This needs to be supported by all bloggers who care about freedom and democracy.

It is completely false for anybody to claim, on the basis of this admitted "estimate," that Iran has ceased to be a candidate member of the fatuously named nuclear "club." It has the desire to acquire the weaponry, it retains the means to do so, and it has been caught lying and cheating about the process. If it suspended some overtly military elements of the project out of a justifiable apprehension in 2003, it has energetically persisted in the implicit aspects—most notably the installation of gas centrifuges at the plant in Natanz and the building of a heavy water reactor at Arak. All that the estimate has done is to define weaponry down and to suggest a distinction without much difference between a "civilian" and a "military" dimension of the same program. The acquisition of enriched uranium and of plutonium, for any purpose, is identical with the acquisition of a thermonuclear weapons capacity. Iran continues to strive to produce both, neither of which, as it happens, are required for its ostensible civilian energy needs.

The briefing that I was given by the British Embassy in Tehran in 2005, showing the howlingly glaring discrepancy between what Iran claims and what Iran does, is not in the least challenged by the most recent conclusions. To say that Iran has "stopped" rather than paused its program is to offer an opinion, not to present a finding.

And what do you think of Obadiah Shoher's arguments against the peace process ( samsonblinded.org/blog/we-need-a-respite-from-peace.htm )?

I'm sympathetic with some of the Shoher's points, and made similar arguments almost four years ago. Were I an Israeli, I wouldn't favor further negotiations. Were I President Bush, I would resist pressure that would force a bad deal.

But, let's face it, the "peace process" isn't about law, rights, justice, or fairness. It's about raw power, a quality Israel, fortunately, has, and about surviving until the next sunrise which, unfortunately, Israel is not and may never be sure of.