I've often disparaged "class warfare" arguments of Democrat politicians and the mainstream media. Most such notions are founded on falsity: bad or unrepresentative data, plus unsupported assumptions that income is stratified or a zero sum statistic. My bias isn't sheltering the rich; rather, I promote public policies that, by spurring growth, historically have proved effective assisting and transforming the poor.

The most frequent falsity is the repeated claim that income in the U.S. is increasingly unequally distributed. I've addressed whether income inequality matters: if incomes of the poor rise with that of the rich, inequality may mirror merit, education or reflect increased opportunity; either way, a mistaken metric for poverty. Today, I return to the point that inequality is overstated or irrelevant because it's typically ephemeral.

Tuesday was income mobility study day. The Department of the Treasury paper got the biggest "buzz," including a favorable Wall Street Journal summary. Treasury sampled almost 120 million federal income tax returns of filers age 25 and over between 1996 and 2005:

Using three different measures of income mobility that track changes in the incomes of a large sample of individual taxpayers over time, this study presents new evidence on income mobility over the decade from 1996 through 2005. Key findings include:

The Journal charted the bottom line:

source: The WSJ
As the WSJ reports:

The key point is that the study shows that income mobility in the U.S. works down as well as up--another sign that opportunity and merit continue to drive American success, not accidents of birth. The "rich" are not the same people over time.

Writing at EconLog, Economist Arnold Kling spots a weakness in Treasury's approach: "I don't see how looking at tax returns can be complete, because some people don't file (of course, many who file pay no taxes, but that is ok as long as their returns are included)." I'm less concerned than Kling, because -- consistent with prior studies -- Treasury (see page 6) excluded taxpayers under 25 "[t]o avoid counting transitions from school to work as mobility." As a result (see page 19), the Treasury data set included "90.7 percent of the resident population age 25 to 64," i.e., taxpayers with jobs, and its "sample is highly representative of the population aged 25 to 64." (In comparison to the employed, older retirees often drop income quintiles while remaining in top quintiles ranked by wealth.)

Still, Kling points to two other studies by Julia Isaacs of the Brookings Institution for The Income Mobility Project, one focused on mobility across generations, the other on the effect of race on mobility. The tone of each is pessimistic; the data less so. The first report found two thirds of children had family incomes higher, adjusting for inflation, than their parents. Of those whose parents were in the lowest income quintile, an astounding 82 percent of children bettered their circumstances: 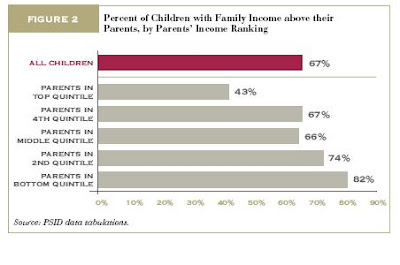 source: Generational Mobility, Figure 2The latter report, covering 1974-2004, found white children were four percent more likely to top their parents' (inflation-adjusted) family income than black children. Yet that still means 63 percent of black children (and 77 percent who started in the bottom income quintile) did better than their parents: 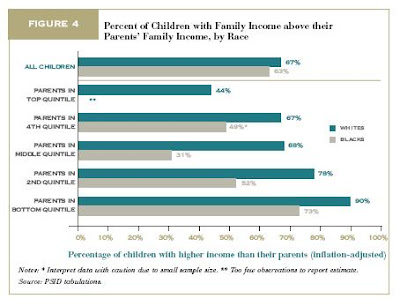 source: Generational Mobility by Race, Figure 4
While the income increases among blacks could be better -- especially among middle-income families -- the economic prospects for African-Americans has improved dramatically since the mid 1970s; I suspect the gains over the past decade are closer to those of whites. But in general, Isaac's results, if not her wording, are similar to prior studies.

Conclusion: Unlike Europe, by beginning without a hereditary aristocracy and minimizing the bureaucratic incursions into the free market, America remains the land of opportunity. Nearly everyone has a chance to become rich. If you make it, you'll pay the lion's share of taxes. And you may later fall: America's economy has chutes as well as ladders. So I agree with Economics Professor Mark Perry:

The new Treasury data support previous research, which overwhelmingly shows that the prevailing myth is pure, populist hokum. The truth is that the rich get richer and the poor get richer, and today's poor are often tomorrow's rich. Income mobility is alive and well today, as it has been for decades. No, make that centuries.

There is little factual basis for populist "soak the rich" rhetoric; indeed, it's likely to hurt those its proponents claim to help. Far from a reality-based community, class warfare lefties are fixated on a fairy tale. Don't help them turn false legend into flawed law.