Oil for No Blood

Texas oilman Oscar Wyatt is on trial accused of dealing with Saddam Hussein's Iraq. According to Reuters, Wyatt plans an unusual defense:

Defense lawyer Gerald Shargel argued the federal case against Wyatt was "entwined" with his opposition to both U.S.-led wars against Iraq. . .. 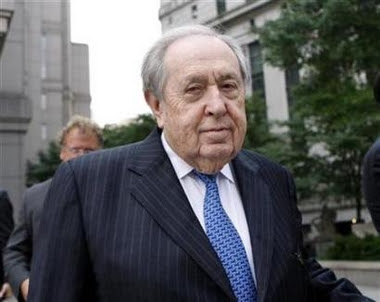 Shargel will set out to prove Wyatt was a patriotic American whose advice was sought by nearly every U.S. president from John F. Kennedy to Bill Clinton, but not the Bushes.

Wyatt, a Democrat, was a "friend and confidant" of Republican presidents Richard Nixon and Ronald Reagan, but "he was no friend or admirer of the other two presidents," George H.W. Bush and his son George W. Bush, Shargel said.

"Mr. Wyatt pleaded with the advisers of George H.W. Bush not to go to war and to resolve this peacefully," Shargel said. "There were (peace) talks and negotiations under way that Oscar Wyatt was involved in."

As Best of the Web's James Taranto quips, "Thank goodness President Bush put the interests of America above those of Texas oilmen."

Apparently getting crushed at trial, Wyatt changed his plea on October 1st:

Wyatt told the federal judge in Manhattan that he agreed in December 2001 to advise others to pay a surcharge into an Iraqi account in Jordan in violation of a program rule calling for no direct payments to Iraq.

"I didn't want to waste any more time at 83 years old fooling with this operation," Wyatt said outside court. "The quicker I get it over with the better."

The plea deal calls for Wyatt to be sentenced on Nov. 27 to 18 to 24 months in prison, unless the judge decides otherwise. He also has agreed to forfeit $11 million.

So Wyatt paid millions of dollars in kickbacks to Saddam Hussein because he was a patriotic American?

I guess in these dayz of 9/11 Truthers and Code Pink patriot trips to Cuba and Venezuela... that is almost believable.

But to be a Bush loyalist is treason?...

At this rate burning American flags and bombing American cities will be patriotic in no time.

Did you see the article about the American "peace" activist who killed a Dutch civilian because his country sent troops to Iraq?

The new slogan of the Left is "Treason is Patriotism and Murder is Peace".