Jonah,
I'm a cancer survivor who was diagnosed in Germany. After two months in the limbo that is Germany's national health care system, I realized it would probably kill me so I returned to the U.S. for treatment. My chemotherapy started on the same day I saw my oncologist in New Jersey. Eleven years later and I'm still here. I wonder what the survival rates are in the UK?

I noted the question in an addendum to a healthcare article posted on August 3rd, pointing to two answers: one, partially anecdotal, in a two-year-old post, another in chart form in that same early-August post: 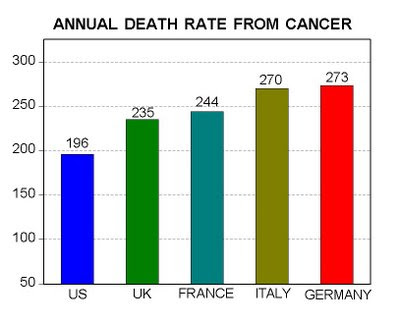 Cancer survival rates in Britain are among the lowest in Europe, according to the most comprehensive analysis of the issue yet produced.

England is on a par with Poland despite the NHS spending three times more on health care.

Survival rates are based on the number of patients who are alive five years after diagnosis and researchers found that, for women, England was the fifth worst in a league of 22 countries. Scotland came bottom. Cancer experts blamed late diagnosis and long waiting lists. . .

A second article, which looked at 2.7 million patients diagnosed between 1995 and 1999, found that countries that spent the most on health per capita per year had better survival rates.

Britain was the exception. Despite spending up to £1,500 on health per person per year, it recorded similar survival rates for Hodgkin's disease and lung cancer as Poland, which spends a third of that amount.

Accompanying the article was this chart: 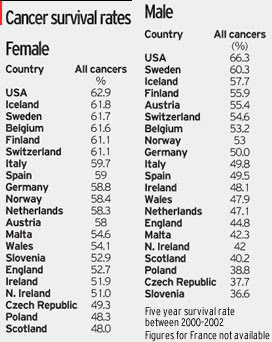 I'm aware of studies and stories to the contrary. But those findings are flawed:

I've always answered with this hypothetical: "You've just been diagnosed with cancer, and must choose medical treatment in one of two places: 1) the best hospital in Cuba; or 2) the Mayo Clinic. Do you buy an airline ticket to Havana or Rochester, Minnesota?"

The U.K.'s closer to Havana than Harvard Med.. The U.S. isn't free--still, it's cheaper and more universal than claimed--and, as the Telegraph recognizes, it works--lowering survival risks desite increasing polyglot immigration that votes with its health-care dollars.

According to the World Health Organization's 2003 investigation into global health statistic methodology, Health Systems Performance Assessment: Debates, Methods and Empiricism, and in particular, the section on The Americas (page 29):

The three dimensions of evaluation utilized in The World Health Report 2000 were discussed. . . The current concept of “responsiveness” encompasses some dimensions of quality of care, but deals only with the demand side. It does not take into account, for example, the technical quality of the supply side. It does not include direct measures of the degree of response to health-seeking behaviours of the population or of user satisfaction, nor does it consider cultural variability among countries and within the same country.

[Moreover], the concept and measure of “fair financing” were evaluated. It was decided that these concentrate exclusively on one side of the problem, the share of household expenditures devoted to health. They do not take into account the effect of public expenditure in public health and personal care. They do not permit the assessment of how progressive or regressive the financing of the health system is, and consequently do not refer to the full spectrum of financial protection with respect to health.

As far as automated charts goes, the number one stumbling block is HIPPA. That is a government program designed to provide absolute identity security in all medical record related ducumentation.
Computers can always be hacked. In some hospitals, this goes so far as to prevent patient names from being posted on ward room charts and from even being placed on the cover if patient medical charts.
Allah help the ward staff where two patients have the same or similar names.

This stuff is great. I've just been discussing this entire issue with a friend. I simply link to your articles.

There is a psychological benefit to believing that you have free health care backing you up as life's vicissitudes come your way. People "feel" good about their already-provided care when they are not using it. It provides comfort.

While that can in itself be a good thing, you will notice that the illusion of quality care would provide the same benefit. Thus, a government only has to convince its citizens that their health care is "good enough" or "better than the other guy's" to achieve the feeling of security.

How the citizens fare once they are sick, not how positive they feel when they are well, is the test of the system.

Nice piece, Carl. Been looking for this sort of thing to combat the viewers of Sicko.

Thanks, all, for the kind words, but in this instance, it's not wholly warranted. I've been tied up with paying work and short on blog time. Even after editing -- I swear I wasn't drunk blogging Friday night, just tired -- I'm not happy about the writing. So far as I am aware, the facts and citations are accurate. But the ideas are poorly, and un-persuasively, expressed. I'll try to do better.