Fraud on the Left

My piece also criticized lefty nut-roots, which were bellowing about "treason" and "politiciz[ing] the judiciary." One leftist I linked was Charles, who blogs at Mercury Rising, whose post about the case -- in its entirety -- is as follows:

I wish that were a joke headline. But when the Plame civil suit is dismissed because a judge says that the crime whose investigation Scooter Libby obstructed, one can say that the law is completely perverted into political ends.

And the bad actor, US District Judge John Bates,was a member of Ken Starr’s team.

(Thanks to Mike Clark at Buzzflash and Thom, commenting at Avedon’s Sideshow)

This entry was posted on Thursday, July 19th, 2007 at 4:56 pm and is filed under activist judges. You can follow any responses to this entry through the RSS 2.0 feed. You can leave a response, or trackback from your own site.

Accepting Charles' invitation, I commented on his site, saying that law suits were no way to settle national security policy, which -- like most issues in our representative democracy -- is resolved by popular sovereignty, i.e., the will of the people expressed via elections. Charles responded that "Disputes, particularly those involving the loss of employment and hence the deprivation of property have been decided by torts since forever." I replied that he "apparently didn’t read the opinion: Plame/Wilson did not claim any adverse employment actions, see slip op. at 16 n.3." Charles volleyed back, quoting paragraphs 43, 44 and 60 of the Plame/Wilson complaint, which mentioned employment impairment, concluded I was "simply lying," and demanded I recant or be banned:

Now you can apologize and depart quietly. Or, you can continue to drown in your own bile and ignorance and I can ban you. But I am not going to waste a precious moment of life on a person coming here purely to pick a fight.

I was there for dialogue--but this is the moment the dialogue died. I replied, pointing out that footnote 3 of Judge Bates' opinion, cited in my second comment, found that Plame/Wilson hadn't claimed any adverse employment actions, quoting a portion of that footnote. My comment appeared on the Mercury Rising site throughout the morning--but was deleted by afternoon!

I didn't delete my comment. Indeed, I saved it, both the text and a screen shot:

Charles, you are mistaken. You accurately quote from the Plame/Wilson complaint. But, they didn’t sue the CIA or claim the defendants engaged in, for example, employment discrimination (an approach ok-ed in Davis). Rather, as Judge Bates said, slip op. at 16 n.3:

That it was not a suit over loss of career but instead over disclosure of private facts is a legal distinction that point plaintiffs toward other possible remedies. And such external process (or barred process) made a difference in the outcome of this Bivens-type suit, see slip op. at 23-27, 29-34. 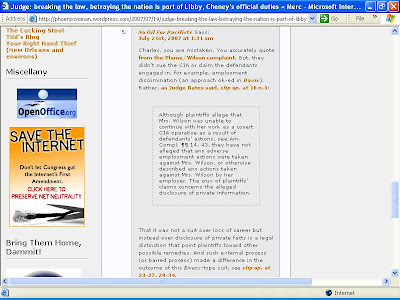 As in "1984," my comment -- quoting the opinion to show where Charles was wrong -- has vanished "down the memory hole." In its place, Phoenix Woman calls me a "little troll", a "[t]ypical amoral right-winger." And Charles is philosophical:

I just want MercRising to be a pleasant place where people of different persuasions can post politely and find a common path.

Or, more succinctly, life is too short to spend it arguing with a–holes.

Ignoring facts and law and deleting proof to the contrary is neither pleasant nor polite. Indeed, as Phoenix Woman concluded (albeit as to the wrong person) it is "amoral." Sadly, such fraud is all too common among present-day progressives. Like his heroes Plame and Wilson, Charles isn't short on Chutzpah.

I went over and put in some comments. Perhaps I will soon be a troll as well.

I never aspired to troll-ness. But if the progressive definition of troll is "one who knows facts and can quote law/decisions, thereby upsetting long-held left-wing prejudice, leaving 'tin-foil hat types' without a retort, thus necessitating -- when spotted -- censorship from liberal discussions, so to preserve pleasant places where people of identical ideas can politely parrot Blue State memes, while skipping fact-checking, overlooking the outcome of prior similar proposals and ignoring possible unintended consequences, outsourcing deductive logic to Democratic Underground and confusing a Kos poll with proof, freeing "progressives" to MoveOn to pre-ordained policies of the past: anti-American, anti-Bush, and anti-Israel," I could get used to it.