The alleged unfairness of Bush's "rich get richer" tax cuts. 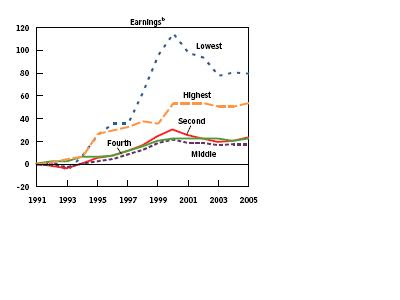 Growth in real earnings, households with children, 1991-2005, by quintile, via Figure 2 of May Congressional Budget Office Report. 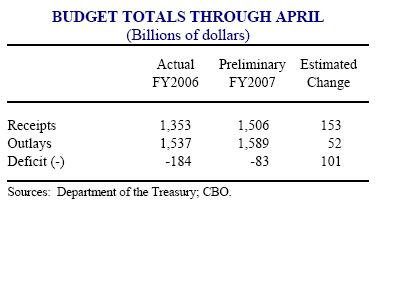 Now, Maxed-Out-Mama knows way more about finance than me. But, really, how bad can America be?

This stuff is fabulous.
Boy did I miss your blogging during your time off.
Keep up the awesome work.

Carl - I know you are a logical type, so you might find this FDIC publication useful. There is a sharp parallel with current credit conditions.

We are in the early stages of a credit-induced recession now. Relatively strong business conditions might have obviated it, but pipeline inflation is too high and is knocking out the rungs of consumer credit support from the bottom up. That will exacerbate the decline in domestic private investment. Commercial credit is already tightening.

After this is over there may be a very strong expansion. Make sure that you have enough cash lying around to profit from it.

Never, never believe official stats until a year is passed. The imputations used on these surveys understate economic rebounds and miss early recessions, because these stats are based on sampling and extrapolating from the previous conditions. When shifts occur, the positive or negative effects of the imputations overcome the actual change in sample.

From 2005 to 2006 corporate profits dropped by about 50%. They can only be maintained now by cutting private domestic investment, which is exactly what's happening.

M_O_M: Well, I tried. But I really have no head for finance. You say that the decline in corporate profits signals we're headed for a fall. Perhaps you should whisper that to Hillary Clinton, who said last week, "last year, the share of America's national income going to corporate profits was the highest since 1929."

Or perhaps my failure to understand explains why I took a bath in the dot-com meltdown of 2000.

Carl, you don't understand because you are logical and too honest to grasp that this situation is being used by the large financial firms to move their bad investments to others.

Interest rates are rising, and will continue to do so. There's nothing wrong with the collapse of wacky subprime - you're right; that is HEALTHY. The problem is that bad debt with similar or worse characteristics is being used to finance LBOs and being used by firms to float bonds that they use to buy back their own shares, thus inflating corporate profits and concealing the real trend, which is collapsing private domestic investment.

I still don't grok. But I was hoping we could blame it all on the Community Reinvestment Act and/or Matthew Lee.