Recently, I argued that global warming fanatics -- in Peter Hannaford's coinage, members of "The Order of The Sky Is Falling (the Hon. Al Gore, founder)" -- see carbon caps as stealthy step toward the global income redistribution formerly promoted by socialism. But I've just read a second equally compelling, and fully compatible, explanation by Greg Gutfeld in May's The American Spectator

[W]hen it comes to terrorism, one must always avoid any "nuanced" conversations -- because "nuanced" means "liberal." "The war on terror is just not that simple," they will say. And anyone who disagrees -- or rather -- anyone who believes that the people who want to kill us need to be killed -- is just "stupid." At some point a solution involving the word "dialogue" will come up -- and probably as a verb!

The only issue where the left believes "nuance" is not needed is in the realm of global warming. If you actually question the basic obviousness behind climate change hysteria -- you will be beaten to death with carbon offsets. Every day another cretin becomes a media expert on global warming -- because in our media being an expert only requires that you know "it's getting warmer and it's our fault." Or, "it's getting colder, and it's our fault." But the real reason why the media, politicians, elitists, and the left that permeates all three can be so simple-minded about global warming is that they are too scared to face the truth about terror. Better that we consider a fantasy war between humans and our planet than a real war between civilizations.

According to progressives, the sky is falling--everywhere except the Middle East. Meaning there is a conspiracy and cover-up. The Twin Towers, and one fifth of the Pentagon's "A" Ring, weren't destroyed by terrorists in airplanes: The carbon did it.

In a post titled "Because You Never Know When Global Warming Is Going to Fly Into a Building," Confederate Yankee quotes Friday's Washington Times:

The House next week will consider the Democrat-crafted Intelligence Authorization bill, which includes a provision directing an assessment of the effects that climate change has on national security.

"Our job is to steal secrets," said Rep. Peter Hoekstra of Michigan, the ranking Republican on the Permanent Select Committee on Intelligence.

"There are all kinds of people analyzing global warming, the Democrats even have a special committee on this," he told The Washington Times. "There's no value added by the intelligence community here; they have no special expertise, and this takes money and resources away from other threats."

Democrats, who outnumber Republicans on the committee, blocked the minority from stripping the warming language from the bill.

Intelligence panel Chairman Silvestre Reyes, Texas Democrat, said the climate-change study is one of several shifts his party has made to intelligence policy.

"We're concerned that global warming might impact our ability to maintain national security," he told The Times, describing the idea as "cutting edge." 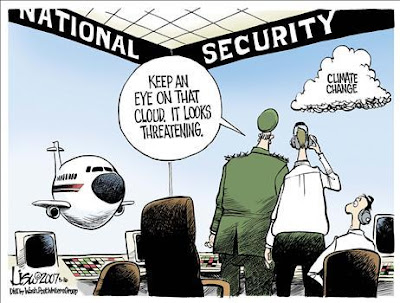