After decades of authoritarian rule, a country can't, or can't easily, become a democracy:

The United States also had an ideological mission. It was determined to impose an American form of democratic government on the defeated, demoralized and hungry Japanese.

General MacArthur and his lieutenants set to work with a brashness and determination that alarmed the Japanese establishment. A tidal wave of reforms all but drowned the old courtiers, officials and industrial czars. However, the unpopularity of the American commands among the conservatives was more than matched by the enthusiasm felt by the dispossessed. The United States quickly became the liberator of many in Japanese society.

The popularity of General MacArthur and his staff rested on a tripod of radical reforms. By insisting that Japan accept an open, democratic political system, they were putting in place the best guarantee that the Japanese would not revert to militarism. In Washington's eyes, its brand of democracy was a sure safeguard against fascism.

After dictating a new constitution for Japan that has lasted without amendment to this day, the United States then altered the education system to buttress the democratic changes. Then it drastically changed the balance of power in rural Japan by eliminating the control of landlords and enabling tenant farmers to own their own rice fields.

Never has American prestige in Europe been lower. People never tire of telling you of the ignorance and rowdy-ism of American troops, of out misunderstanding of European conditions. They say that the theft and sale of Army supplies by our troops is the basis of their black market. They blame us for the corruption and disorganization of UNRRA. They blame us for the fumbling timidity of our negotiations with the Soviet Union. They tell us that our mechanical de-nazification policy in Germany is producing results opposite to those we planned. "Have you no statesmen in America?" they ask.

While the surrender of German Armed Forces was accepted by the Allies in May of 1945, fighting would continue in the European theatre of war for the next two years in the form of guerrilla and German partisan activity, known today as an "insurgency", but know at the time was "Werewolves". US Military Deaths from accidents and from partisan activity from 1945 until 1949 are estimated to be roughly 4,000 deaths, excluding the period of time known as the 'Berlin blockade', which would increase the number to 6,000. Civilian deaths in the same period resulting from starvation, harsh imprisonment, civil reprisal and the displacement of large numbers of people as refugees were numbered in the tens of thousands. General starvation for the civilian populace remained a serious issue to be solved until the early 1950's.

It's hopeless to intervene in a civil war2:

In May 1946 the Greek civil war resumed, with Yugoslavia, Bulgaria, and Albania channeling support to Communist guerrillas who aim to overthrow the Greek Government. because of its mountainous terrain and common borders with the Communist Balkan countries, Northern Greece (Macedonia, Thrace, Epirus), became the center of the conflict. . .

On 22 May 1947, President Truman signed an Interim Aid Bill establishing the American Mission for Aid to Greece (AMAG). Less than a month later, expanding on the principles of the Truman Doctrine, Secretary of State George Marshall proposed his plan for long-term economic recovery for all European nations. By spring 1948, the Marshall Plan was channeling dollars to Europe. Some of the money supplemented AMAG funds for Corps projects already underway.

In the ensuing three years [1947-49], Greece and Turkey received well over $600 million in both United States. military and economic aid. The legislation authorizing that aid stipulated that United States military advisers would administer the programs within the respective countries. By mid-1949 there were over 527 United States armed forces personnel in the Joint United States Military Advisory and Planning Group in Greece and over 400 in a similar organization in Turkey. With the establishment of these units, the administration of military assistance acquired another dimension, that of creating advisory groups which would eventually operate in many areas of the world and involve United States military personnel by the thousands. Thus, the Truman Doctrine was to provide a precedent for the principle of collective security. It was cited as the foundation of subsequent similar programs under the premise that to promote the security and well-being of friendly foreign nations was in the best national interest of the United States.

US financial aid stabilized the Greek government and its military assistance helped force the ELAS back to the north. . . The last significant refuge of the Greek Communists was captured on August 28, 1949. On October 16, ELAS announced its surrender.

Iraq is not analogous to the American Civil War:

[W]e reached for Lloyd Wendt's history of the Chicago Tribune, which begins with a chapter about what could have been called the Civil War Surge. It tells of an encounter, in 1865, between the young editor of the Tribune, Joseph Medill, and President Lincoln. . . .

The encounter Mr. Wendt describes . . . started when a delegation comprising Medill and two other Chicagoans had gone to the war department to try to get Secretary Stanton to back off from drafting more men from Cook County. An angry Stanton rebuffed them, and they'd gone over his head, to the White House, and met with Lincoln in his office. Lincoln wouldn't back off, either; a dozen states were trying to get out of draft calls. But Lincoln agreed to walk back over to Stanton's office and "hear the argument on both sides." . . . Medill made a game effort, reading from his own newspaper about how no other congressional district had put so many men into the war.

For months, Mr. Wendt explains, the Tribune had "acknowledged to its readers that after four years of the most brutal fighting known to man, even greater sacrifices would be required. The armies were devouring men on a scale not known before in military history, as new weapons outmarched generals' old tactics." . . .

When Medill finished his plea, Stanton nodded to his provost marshal, General Fry, who "read the sanguinary statistics of four years of fighting in a loud, sonorous voice," while Lincoln listened with his head bowed. Stanton then rejected the plea.

Robert Fisk: But what of the Arab mujahedin [you] took to Afghanistan -- members of a guerilla army who were also encouraged and armed by the United States -- and who were forgotten when that war was over?

Osama Bin Laden: Personally neither I nor my brothers saw evidence of American help.

America "created" Saddam by selling him conventional and chemical weapons before the first Gulf war:

U.S. sales were trivial compared to others. James Ruhland sourced Iraq's weapon inventory at the time of the first Gulf War (90-91)--none came from America. Moreover, in early 2003, Admiral Quixote created two charts based on data from Stockholm International Peace Research Institute: 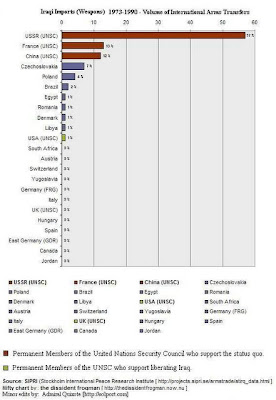 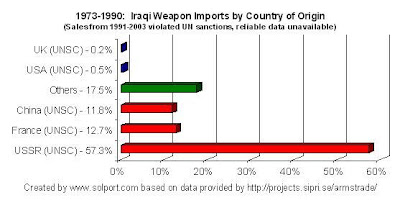 Saddam's Sources With A UN Veto (click to enlarge)

Terrorists captured in Iraq or Afghanistan must be afforded the protections applicable to prisoners of war:

Prisoners of war, in the sense of the present Convention, are persons belonging to one of the following categories, who have fallen into the power of the enemy:

(1) Members of the armed forces of a Party to the conflict, as well as members of militias or volunteer corps forming part of such armed forces.

(2) Members of other militias and members of other volunteer corps, including those of organized resistance movements, belonging to a Party to the conflict and operating in or outside their own territory, even if this territory is occupied, provided that such militias or volunteer corps, including such organized resistance movements, fulfill the following conditions: (a) that of being commanded by a person responsible for his subordinates; (b) that of having a fixed distinctive sign recognizable at a distance; (c) that of carrying arms openly; (d) that of conducting their operations in accordance with the laws and customs of war.3


Terrorists captured in Iraq or Afghanistan must be afforded the protections applicable to civilians in occupied territory:

Where in occupied territory an individual protected person is detained as a spy or saboteur, or as a person under definite suspicion of activity hostile to the security of the Occupying Power, such person shall, in those cases where absolute military security so requires, be regarded as having forfeited rights of communication under the present Convention.4

Our troops think the war has been lost and want to leave:

It’s all about time -- give me some time, give us time. The average duration of insurgencies is somewhere around ten years.

Conclusion: The U.S. and its allies should persevere in Iraq. America's affirmative action experiment was given 25 additional years of Constitutionality in Grutter v. Bollinger, 539 U.S. 306, 341 (2003). The left loved it. Our experiment in securing a democratic Iraq warrants at least 40 percent of that.

A bleak picture springs with stark immediacy from typewritten reports by the Allied officers, found in the massive archive of the International Tracing Service in the central German town of Bad Arolsen. . .

Far from scenes of joyful liberation that should have greeted the end of Nazi oppression, the files reveal desperation, loss and confusion, and overwhelmed and often insensitive military authorities.

Why is it obvious that intervening in a civil war is not only wrong, but so self-evidently wrong that merely calling the Iraqi conflict a civil war closes off discussion?

Surely it can’t be a moral argument. Every liberal foreign policy do-gooder in Christendom wants America to interject itself in the Sudanese civil war unfolding so horrifically in Darfur. The high-water mark in post-Vietnam liberal foreign policy was Bill Clinton’s intervention in the Yugoslavian civil war. If we can violate the prime directive of no civil wars for Darfur and Kosovo, why not for Kirkuk and Basra?

If your answer is that those calls for intervention were "humanitarian," that just confuses me more. Advocates of a pullout mostly concede that Iraq will become a genocidal, humanitarian disaster if we leave. Is the prospect of Iraqi genocide more tolerable for some reason?

Then there are those who take the fatalist’s cop-out: Civil wars have no good guys and bad guys. They’re just dogfights, and we should stay out of them and see who comes out on top. But that’s also confusing, because not only is it not true, liberals have been saying the opposite for generations. They cheered for the Reds against the Whites in the Russian civil war, for the Communists against the Fascists in the Spanish civil war, and for the victims of ethnic cleansing in Yugoslavia and Sudan. Surely liberals believe there was a good side and a bad side in the American Civil War?

3 Terrorists are not members of an enemy armed force or militia:

It is a violation of the laws of war to engage in combat without meeting certain requirements, among them the wearing of a distinctive uniform or other easily identifiable badge and the carrying of weapons openly. Impersonating soldiers of the other side by wearing the enemy's uniform and fighting in that uniform, is forbidden.

4 Guantanamo detainees are not criminal defendants:

One persistent media myth about Guantanamo Bay is that it is a prison or a jail--that is to say, a criminal detention facility. This myth is seldom stated explicitly, but it shows up in reporters' use of police-beat jargon: describing detainees as "suspected" or "alleged" terrorists; noting that most are "held without charge," etc.

But in an editorial yesterday, the New York Times stated flatly that Guantanamo should be shut and the detainees either released or tried as civilians, under "the time-tested procedures of the normal American legal system."

To the contrary, unprotected persons need not be tried:

In each case, such persons shall nevertheless be treated with humanity and, in case of trial, shall not be deprived of the rights of fair and regular trial prescribed by the present Convention. (emphasis added)