Anti-war Democrats claim democracy is a post-hoc rationalization for the Iraq invasion. How quickly the left forgets the invasion's code name: "Operation Iraqi Freedom." And, as detailed here and, at greater length, elsewhere, President Bush always argued liberating Iraqis and fostering democracy justified the invasion, for example on March 6, 2003:

In the event of conflict, America also accepts our responsibility to protect innocent lives in every way possible. We'll bring food and medicine to the Iraqi people. We'll help that nation to build a just government, after decades of brutal dictatorship. The form and leadership of that government is for the Iraqi people to choose. Anything they choose will be better than the misery and torture and murder they have known under Saddam Hussein.

Action to remove the threat from Iraq would also allow the Iraqi people to build a better future for their society. And Iraq's liberation would be the beginning, not the end, of our commitment to its people. . .

Iraq has the potential to be a great nation. Iraq's people are skilled and educated. We'll push as quickly as possible for an Iraqi interim authority to draw upon the talents of Iraq's people to rebuild their nation. We're committed to the goal of a unified Iraq, with democratic institutions of which members of all ethnic and religious groups are treated with dignity and respect.

Reminded of conservative consistency -- confirmed by Congress ("whereas" 17) -- the surrender-now squad (including Euros) attack Bush's pro-freedom policy calling it "unilateral," unrelated to our safety or well being and overly expensive, threatening domestic social programs. They also think it hopeless because democracy cannot come top-down from abroad; believing an "imposed" democracy is inauthentic and will fail so long as armed coalition forces remain in Iraq: 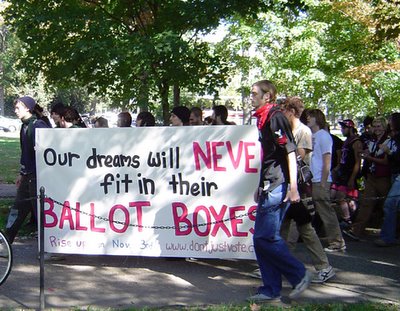 (source: INDC Journal)
Uh, fellows, you've also forgotten Japan and Germany. And wrong on the facts: democracy in Iraq is working -- even among Sunnis -- because of our soldiers. Just listen to the experts--the Iraqi people.

But more importantly, the left's tangled in inconsistencies. Long ago, they championed freedom. Formerly, they said "never again." More recently, some blamed Islamic terror on our failure to promote middle-East democracy.

Once upon a time, liberals accepted John F. Kennedy's challenge:

Let every nation know, whether it wishes us well or ill, that we shall pay any price, bear any burden, meet any hardship, support any friend, oppose any foe, to assure the survival and the success of liberty.

To those new states whom we welcome to the ranks of the free, we pledge our word that one form of colonial control shall not have passed away merely to be replaced by a far more iron tyranny. We shall not always expect to find them supporting our view. But we shall always hope to find them strongly supporting their own freedom -- and to remember that, in the past, those who foolishly sought power by riding the back of the tiger ended up inside. 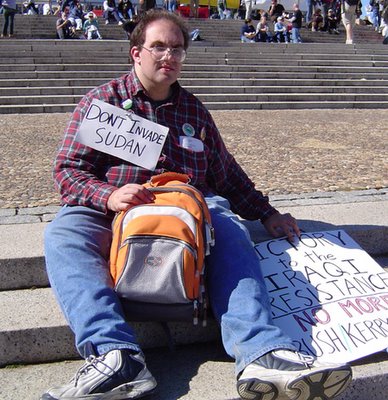 (source: INDC Journal)
The present "progressives" claim the lack of freedom "can't be fixed." Iraq, they insist, is "not our problem." What about mass-murderer Saddam Hussein? Author, actor and liberal blogger Wil Wheaton spoke for many:

For a half century, America defended our own freedom by standing watch on distant borders. After the shipwreck of communism came years of relative quiet, years of repose, years of sabbatical - and then there came a day of fire.

We have seen our vulnerability - and we have seen its deepest source. For as long as whole regions of the world simmer in resentment and tyranny - prone to ideologies that feed hatred and excuse murder - violence will gather, and multiply in destructive power, and cross the most defended borders, and raise a mortal threat. There is only one force of history that can break the reign of hatred and resentment, and expose the pretensions of tyrants, and reward the hopes of the decent and tolerant, and that is the force of human freedom.

We are led, by events and common sense, to one conclusion: The survival of liberty in our land increasingly depends on the success of liberty in other lands. The best hope for peace in our world is the expansion of freedom in all the world.

You'd think the Democratic Party would welcome this: They spent the days after Sept. 11 yakking endlessly about the need to address "root causes." But, . . . they still don't comprehend the new world — abroad or at home.

Since January 20, 2001, Saddam's moved down-market from wanted poster to spider hole to criminal defendant, and Iraqis embraced freedom and Constitutional democracy. In response, many lefties channeled Nixon: deny, deny, deny. Others -- the perpetual pessimist wing -- are stuck on stonewall, whining without alternatives. To them, expanding middle-East freedom and democracy is mere coincidence. Contrary to fact, they insist responsible government propagates when despots are ignored and see the Army as the enemy, rather than the guarantor, of freedom--for them, American force is always immoral.

Some, I know, have questioned the global appeal of liberty - though this time in history, four decades defined by the swiftest advance of freedom ever seen, is an odd time for doubt. Americans, of all people, should never be surprised by the power of our ideals. Eventually, the call of freedom comes to every mind and every soul. We do not accept the existence of permanent tyranny because we do not accept the possibility of permanent slavery. Liberty will come to those who love it.

Today, America speaks anew to the peoples of the world:

All who live in tyranny and hopelessness can know: the United States will not ignore your oppression, or excuse your oppressors. When you stand for your liberty, we will stand with you.

Democratic reformers facing repression, prison, or exile can know: America sees you for who you are: the future leaders of your free country.

The rulers of outlaw regimes can know that we still believe as Abraham Lincoln did: "Those who deny freedom to others deserve it not for themselves; and, under the rule of a just God, cannot long retain it." . . .

Our country has accepted obligations that are difficult to fulfill, and would be dishonorable to abandon. Yet because we have acted in the great liberating tradition of this nation, tens of millions have achieved their freedom. And as hope kindles hope, millions more will find it. By our efforts, we have lit a fire as well - a fire in the minds of men. It warms those who feel its power, it burns those who fight its progress, and one day this untamed fire of freedom will reach the darkest corners of our world.

Democracy isn't confined to caucasians or Christians. As all-stars from Wilson to FDR to Truman understood, America's aspirations are every man's dream--including Iraqis. So previous Dems would support the Administration's Iraq policy.

When I've presented similar arguments in debates with leftists they just ignore it and continue on like they didn't hear it or read it.
It's quite astounding to witness.

When President Bush went to the United Nations on Sept. 12, 2002, to make his case for action against Saddam Hussein, the first U.N. resolution Bush cited was U.N. Resolution 688.

That resolution, rare in the history of the U.N., required that Saddam end his repression and mistreatment of the Iraqi people. As Bush told the U.N. 11 years after passage of 688, Saddam hadn't ended his repression and showed no sign he ever would.

The only way to end repression is to remove the dictatorship and replace it with a democracy. As a real liberal, I'm pleased that the United States recognized that truth and took action.

Bush's first justification for action against Saddam just happened to be the best.

Excellent work! Where do you find the time to dig up all those links?

You inspire more passion for this argument so often heard, so often debated, so often ignored, in such a good, tactful and impressive manner.

I suppose they must feel urged to say anything to justify pacifism unless there's war-time Democratic President.

> Author, actor and liberal blogger Wil Wheaton spoke for many...

Wheaton. There's a reason he's one of the most reviled characters in ST history, particularly by anyone who is an actual SF fan (as opposed to drooling trekkies [distinct from trekkers])...

> Wheaton: But listen, who the fuck am I to criticize Stephen King?

Yeah, Deus Ex Wesley-boy, let's ask a better question: Who the fuck are you to criticize the president? Someone gave you an honorary doctorate in foreign policy?

Don't get me wrong, everyone can criticize the president -- I just find it hilariously ironic that he thinks nothing of criticizing the president (exercising executive power being an arena which he knows absolutely nothing about and has no experience of) but hesitates about criticizing a writer (something he has some limited talent, knowledge, and skill in regards to).

I agree. I used to throw pens at the screen whenever the pre-teen twerp was allowed at the helm of a UFP starship. I`m unsurprised to find he`s grown up but still unable to think.

Thanks. Most say I`ve written the same thing far too often.