In Wednesday's Wall Street Journal, Debra Burlingame blew the whistle on the 9/11 memorial planned for the rebuilt World Trade Center:

The organizers of its principal tenant, the International Freedom Center (IFC), have stated that they intend to take us on "a journey through the history of freedom"--but do not be fooled. . . To the IFC's organizers, it is not only history's triumphs that illuminate, but also its failures. The public will have come to see 9/11 but will be given a high-tech, multimedia tutorial about man's inhumanity to man, from Native American genocide to the lynchings and cross-burnings of the Jim Crow South, from the Third Reich's Final Solution to the Soviet gulags and beyond. This is a history all should know and learn, but dispensing it over the ashes of Ground Zero is like creating a Museum of Tolerance over the sunken graves of the USS Arizona.

The public will be confused at first, and then feel hoodwinked and betrayed. Where, they will ask, do we go to see the September 11 Memorial? . . . Most of the cherished objects which were salvaged from Ground Zero in those first traumatic months will never return to the site. There is simply no room. But the International Freedom Center will have ample space to present us with exhibits about Chinese dissidents and Chilean refugees. These are important subjects, but for somewhere--anywhere--else, not the site of the worst attack on American soil in the history of the republic.

This was too much even for the New York Times:

But the experience soon becomes Orwellian. The center's upper-level galleries will be arranged in a spiral around the central light well. Under the current design, visitors will have to ride an elevator to the top and then walk back down along the spiral on a so-called "Freedom Walk." This kind of manipulation seems silly, especially in a museum that celebrates freedom. By echoing the ramps down into the memorial pools, the downward spiral implies a direct connection between the cataclysm of 9/11 and a global struggle for "freedom" -- a bit of simplistic propaganda. (An early rendering of the Freedom Center that was circulated at the development corporation's offices included an image of a woman flashing a victory sign after voting in the recent Iraqi elections; that image has been replaced by a photo of Lyndon B. Johnson and the Rev. Dr. Martin Luther King Jr.)

Imagine that: memorializing victims of Islamic terrorism by substituting the right-side photo for Rose of Baghdad's spontaneous joy:


Actually, no imagination is required, given some of the "scholars" advising IFC's project, as Burlingame (and Michelle Malkin) describe:

IFC's President Richard Tofel replied in Thursday's WSJ, but dissembled, not disputed, most allegations. WSJ reader Michael Murray replied in a letter to the editor headlined, "You'll Always Have Paris":

After reading the WSJ article "The Great Ground Zero Heist", by Debra Burlingame, June 7, 2005, I can't help but feel this response by Mr. Tofel--president of the "so called" International Freedom Center--is a classic hose-job. Ms. Burlingame must have lit a pretty good fire to get such a quick "response" from Mr. Tofel. I have the impression she gave us more of the unvarnished truth on the matter than we're hearing from Mr. Tofel. I support Ms. Burlingame 100%. Mr. "T," and company, can take their International Freedom Center and put it in Paris somewhere.

Democrat Jeff Jarvis agrees the IFC is constructing a "Why They Hate Us Pavilion":

[W]hen you build this center, will you include the atrocities of the Saudis and Saddam Hussein and the PLO and all the tyrants of the Middle East? Will have you have an exhibit about the women there who do not have the freedom to vote or even drive?

Will you build a special wing for the special sickness that is suicide terrorism -- in Israel and in Iraq and at the World Trade Center? Or will you be afraid of offending Muslims?

Well, I'm offended. The World Trade Center is a place for remembrance of the innocents and victims of that day and for a return to life.

Jarvis is right. The World Trade Center memorial was supposed to:

Three thousand lives and the trade center itself were hijacked and extinguished by terrorists. The place intended to "remember," "honor" and "respect" the dead and the day must not be hijacked again.

Debra Burlingame's the sister of Charles F. "Chic" Burlingame III, pilot of American Airlines fight 77, which was crashed into the Pentagon on September 11th [two friends were passengers--ed.]. Her WSJ op-ed asked, "Ground Zero has been stolen, right from under our noses. How do we get it back? She's now answered her own question on a new website called Take Back the Memorial. Count me in to "take back the memorial and make it a fitting tribute to the nearly 3000 people that died on that terrible September day." Unless we exorcize politically correct, academic socialism from the site, anti-Americanism will capture our flag. 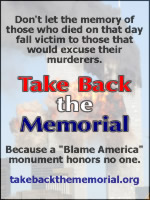