Everyone abhors poverty. But many drastically overstate the problem, or rush to judgment about the proper policy response. This is the first of a multi-part look at poverty. Today's topic: measuring poverty.

A different Census Bureau report shows that only about 13 percent of those who become poor remain in poverty after 24 months: 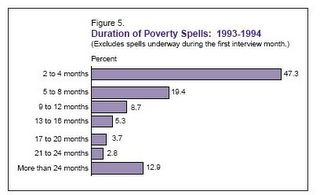 [T]he official poverty rate is not reflecting shifting living conditions in the United States. A wealth of evidence shows that those who are counted as poor today have dramatically higher living standards than their counterparts in the 1960s, when the poverty rate was originally devised.

Given these two options, I’d choose to live today with only 1967’s real median household income. The reason is that the economy today offers so very many more options than did the economy in 1967 – or even the economy of that halcyon year, 1973. Today I can buy cell-phone service; today I can buy cable television with hundreds of channels, including ones that specialize in sports, cooking, history, and science; today even the cheapest automobiles are safer and more reliable than were the finest cars for sale in 1967; today I can buy telephone answering machines (with caller-ID), microwave ovens, CDs, personal computers, Internet service, and MP3 players. Today I can watch movies in my own home – in color – whenever I want without having to wait for one of the three or four available television stations to telecast a movie for viewing on a black-and-white television.

Once a year, the World Bank takes the temperature of the global economy, especially for the Developing world. According to James Peron, writing in the December 13, 2006, TCS, those working in DC's 18-20th and Pennsylvania-E Street area -- and their client customers in the Third World -- should be in very good cheer:

The report, Global Economics Prospects 2007 says "developing economies are projected to grow by 7.0 percent in 2006, more than twice as fast as high-income countries (3.1 percent), with all developing regions growing by about 5 percent or more." While these nations have only 22 percent of global GDP they accounted for 38 percent of the increase in global output. And they are expected to increase their share of global output by about 50 percent by 2030.

The report expects the world economy to grow from last year's $35 trillion to $72 trillion by 2030. And this "is driven more than ever before by strong performance in the developing countries." Only two decades ago the poor nations provided only 14 percent of wealthy nations' manufactured imports. Today they provide 40 percent and by 2030 they are projected to provide over 65 percent.

For the next 25 years the report estimates that developing nations will increase their wealth by an average of 3.1 percent per year, above their average of 2.1 percent for the last 25 years. "That rate of increase will produce average per capita incomes [constant dollars adjusted for purchasing power parity] in the developing world of $11,000 by 2030, compared with $4,800 today, roughly the level of the Czech Republic and the Slovak Republic today."

The net result is that the income of developing countries "will continue to converge with those of wealthy countries. This would imply that countries as diverse as China, Mexico and Turkey would have average living standards roughly comparable to Spain today."

* Forty-three percent of all poor households actu­ally own their own homes. The average home owned by persons classified as poor by the Cen­sus Bureau is a three-bedroom house with one-and-a-half baths, a garage, and a porch or patio.

* Only 6 percent of poor households are over­crowded; two-thirds have more than two rooms per person.

* The typical poor American has more living space than the average individual living in Paris, Lon­don, Vienna, Athens, and other cities throughout Europe. (These comparisons are to the average citizens in foreign countries, not to those classi­fied as poor.)

* Nearly three-quarters of poor households own a car; 31 percent own two or more cars.

* Eighty-nine percent own microwave ovens, more than half have a stereo, and a more than a third have an automatic dishwasher.

According to the Census Bureau, the median duration for receiving food stamps is six months, with 40 percent of such spells four or fewer months and only 20 percent more than two years.
Posted by @nooil4pacifists at 1/25/2005 07:25:00 PM

I also have a buddy, that will really enjoy this page, so ill send them, a link to your website, as well. I am sure they will really like it.