I'm no fan of pacifism. Worse still are today's pretend pacifists. They claim the moral authority of the abolish-war-forever-so-all-men-and-women-can-live-in-harmony crowd. But, as Glenn Reynolds has chronicled, the opponents of invading Iraq weren't anti-war--"They're just on the other side." Put differently, today's liberals don't oppose war as much as they pray for a war ending in America's defeat. Rather than promoting peace, they're violent and hateful.

The past week supplied two examples. First, as noted by LGF Friday and the WaPo Saturday, President Bush's visit to Chile provoked protests in Santiago. The demonstrators claimed to be anti-war: 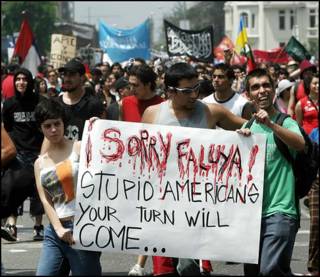 Another proponent of non-violence is Carolyn Parrish, a Member of Parliament in Canada. Ms. Parrish got plenty of coverage before the Iraq invasion when she muttered: "Damn Americans ... I hate those bastards" at a press conference. The Canadian government forced her to apologize. Apparently Parrish was neither contrite nor sincerely non-violent--as she demonstrated on a talk show this week: 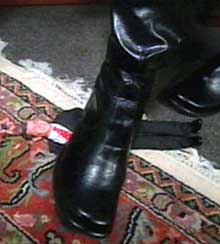 Pacifists claim to seek global peace and end armed conflict. They argue hate breeds war. And they insist liberalism is the antidote to supposed conservative values such as violence and bigotry. But today's pacifists crave America's destruction and Bush's death. They overflow with hate and intolerance.