I've got a new hobby: monitoring the left's reaction to Bush's re-election. On the plus side, Sunday's Meet the Press featured James Carville who, though reptilian, is self-deprecating: 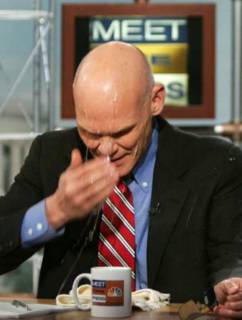 James Carville smashing an egg on his face (click to enlarge)

So far, it's mostly been a circular firing squad, with little risk to Republicans or non-combatants.

Yet the debate's downside is growing and spreading. Since Election Day, the open-minded, tolerant left has become increasingly rabid. They're surprised and appalled, spewing kooky quotes, parading in demented demonstrations, claiming fraud and generally holding their breath until they turn blue or emigrate to Canada. Amnesty International--which claims it's "independent of any government, political ideology, economic interest or religion [and] does not support or oppose any government or political system"--went totally bananas: 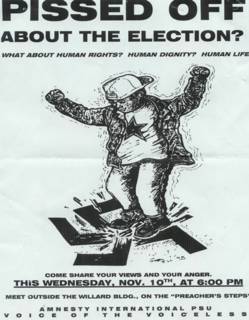 In short, the Democrats are channeling Hate Week from Orwell's 1984.

The fascists in Orwell's novel were encouraged to detest the largely imaginary Emmanuel Goldstein. As Peter Wallison observed, today's Dems similarly have identified a boogie-man to blame: the religious right. Paul Marshall chronicles the craziness in the (currently subscription-only) November 22nd Weekly Standard:

Three writers preached petulant sermons on the matter on the same New York Times op-ed page two days after the election. Maureen Dowd called for George W. Bush's excommunication for promoting "a jihad in America so he can fight one in Iraq." Thomas Friedman condemned as apostates from America those "Christian fundamentalists" who "promote divisions and intolerance at home and abroad." Garry Wills, ever inquisitorial, demanded "where else" but in America "do we find fundamentalist zeal, a rage at secularity, religious intolerance, fear of and hatred for modernity?" Can't guess? "We find it in the Muslim world, in al Qaeda, in Saddam Hussein's Sunni loyalists"--and, writes Wills, Americans fear "jihad, no matter whose zeal is being expressed." Meanwhile, Ellen Goodman conjures up apocalyptic visions of a "country racked by the fundamentalist religious wars we see across the world," and Sean Wilentz anathematizes "the religious fanaticism that has seized control of the federal government."

Ha, ha, ha. This hardly supports the left's asserted open-mindedness and toleration, to say the least.

Every election year, we in the commentariat come up with a story line to explain the result, and the story line has to have two features. First, it has to be completely wrong. Second, it has to reassure liberals that they are morally superior to the people who just defeated them.

In past years, the story line has involved Angry White Males, or Willie Horton-bashing racists. This year, the official story is that throngs of homophobic, Red America values-voters surged to the polls to put George Bush over the top.

This theory certainly flatters liberals, and it is certainly wrong.

Here are the facts. As Andrew Kohut of the Pew Research Center points out, there was no disproportionate surge in the evangelical vote this year. Evangelicals made up the same share of the electorate this year as they did in 2000. There was no increase in the percentage of voters who are pro-life.

The truth is, Kerry was defeated both by George Bush and by the Democrats themselves:

The far left wing has hijacked the Democratic Party. When lifelong Democrat Zell Miller spoke at the Republic National Convention, Democratic leadership should have realized they needed to change direction. The likes of John Kerry and Al Franken have become louder voices than Joe Lieberman and Evan Bayh. Baring a catastrophic failure by the second Bush administration, if things go as they are, it is likely that the Republican majority will become structural for the foreseeable future.

If the left wants to regain any semblance of significance, it needs to stop demonizing the right and look to within for the source of its salvation.

But even the word "salvation" turns lefties into moonbats. After the election, liberal columnist Michael Kinsley fumed:

We on my side of the great divide don't . . . believe that our values are direct orders from God. We don't claim that they are immutable and beyond argument. We are, if anything, crippled by reason and open-mindedness, by a desire to persuade rather than insist. Which philosophy is more elitist? Which is more contemptuous of people who disagree?

It's a simple question deserving a simple answer: liberals today are the more intolerant. The left demonizes religion and assumes political views informed by faith are ignorant. Just the phrase "right-wing" or "Christian conservative" are enough to inspire dozens of hillbilly jokes. Elites believe liberal philosophy is more "evolved" than conservatism--which is why much of America accurately views Democrats as elitist.


Liberal elites are concentrated in the North-East, the Pacific coast, and the upper mid-West. November 2nd proved this base isn't enough. Democrats must expand or die--by appealing to voters outside the rabidly secular community. Such as the articulate, anonymous young woman writing as A Sad American:

I listened all day on Good Friday as host after host mocked people like me for believing in Jesus's life, death, and resurrection. I listened as Janeane Garofalo, who was one of my favorite comedians for years, expressed hatred and disgust for Bush voters so vile that I ended my live stream feeling assaulted, as if I'd been vomited on. I listened the night that Mike Malloy told a young Republican to hang up the phone and go open a vein. I listened to pure, unadulterated venom that was so intense I sometimes cut the stream and cried.

If it is to survive, the Democratic Party must step back from Hollywood, pundits and comedians, and return to the broad coalitions of its mid-Twentieth Century successes. In other words, lose the hate. Because "sad" Democrats become happy Republicans.

Paula Berinstein: Let those Democratic leaders who think their party should show more religious faith and moderate its stand on abortion know this: If the Democratic Party does so, it will lose millions of lifelong members like me.

Moving to the right is not the answer. The Democrats got 48 percent of the vote in the 2004 presidential election. They don't need to change their positions. They need to take control of the debate, get their voters to the polls and make sure that Republicans don't pull dirty tricks.

If the Democratic Party moves to the right, I will defect to the Green Party, as will many of my friends and family.

The Republican Party, and indeed the country, seems to be falling more every day under the conservative Christian spell. We need a strong opposition, a return to the secular humanism on which our nation was founded.

The night after the election, PBS correspondent Margaret Warner recounted a conversation she’d had with a John Kerry aide, still reeling from the results of a contest he and his boss were certain they’d win. "You know, Margaret," he said, "the Republicans were talking to five, six, seven million people that we don’t understand at all...and you and the press don’t understand them either." . . .

What Kerry’s secularist supporters can’t seem to understand is that the evangelicals, the John Paul II Catholics, and the observant Jews don’t need explaining; what needs explaining is the Harvard faculty club, Michael Moore, and most of the op-ed regulars at the New York Times – people who’ve persuaded themselves that a profound belief in the God of the Bible, expressed in a commitment to live by the Ten Commandments, is the fast track to fascism. They’re the anomaly, not the believers. If they’d ever take a field trip out of their secularist bunkers to meet the rest of America, they might find we’re not so scary after all.