The Democratic party has two options: grow up or go nuts. Deprived of Clinton's centrist instincts and out-sized personality, the party's repeatedly failed at the national level. Thoughtful Democrats might re-invent the party as moderates, says Hugh Hewitt in the Weekly Standard:

The worst legacy of the '60s was its Vietnam complex. The opposition to the war in Iraq--even after 9/11, even after inspections of the vast munitions dump that was Saddam's wasteland--was as much about legitimizing the huge mistakes of 1974 and 1975 as it was about concern of a new "quagmire." The collective trauma of those years--relived in the Swift Boat Vets' campaign and stage lit by the reactions they produced--had a last revival tour in 2004. When Senator Kerry called the president, it put a tombstone on that debate. It didn't end it, but it is hard to see how it will ever play on center stage again. Everyone is too damn old, and sick to death of the shouting.

A new left, confident of American power in the service of security at home and freedom abroad, could still emerge. Joe Biden has to be shoved aside, and Joe Lieberman elevated. Pat Leahy has to get an elbow and a talking to about how his extremism has played over two election cycles. In short, the old left has to let go, and let the new left grow up and learn to shun the nuts like Michael Moore while learning to support American foreign policy.

I hope Hewitt is right, but fear he's overly optimistic. I anticipate a left turn followed by a steep drop. Many, perhaps most, Democrats will blame defeat on nominating a "middle of the road" candidate (yes, that's how they view Kerry). That strategy failed, they will argue--so why not become even more radicalized?

The evidence to date confirms my fears. Democrat politicians are demoralized; the mainstream media predicts a parade of horribles; the foreign press is puzzled; liberal pundits are bitter and root for a recession; left-wing bloggers are apoplectic; and party faithful who aren't in denial are contemplating fleeing to Canada (bon voyage!).

The Democrats think Bush is Hitler and America a banana republic. They don't recognize how far they've departed from the mainstream, says Glenn Reynolds:

The common theme is hatred of America, as depicted in this Boston Globe election post-mortem:

Some Kerry supporters were fairly bursting with anger yesterday. Jessica Johnson, 59, of Cambridge, who said she had volunteered for Kerry, said she was filled with optimism on Election Day, telling herself: ''When Kerry gets into the White House, this stone, this weight on my chest, will be lifted."

''He could have made a great president," Johnson said. ''Many Americans have nothing between their ears. Americans are fat, lazy, and stupid. I don't like this country anymore."

As always, California is the epicenter of the blame-America-first crowd. They descended on San Francisco Thursday; via Instapundit, photos courtesy of blogger Zombie Time: 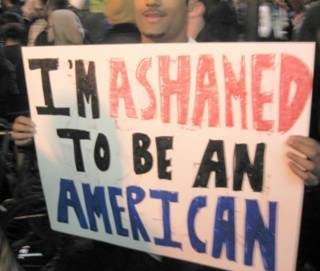 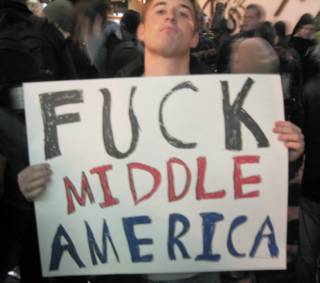 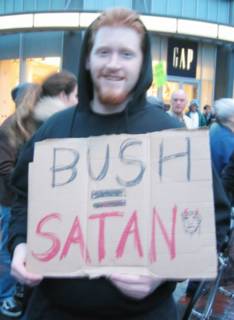 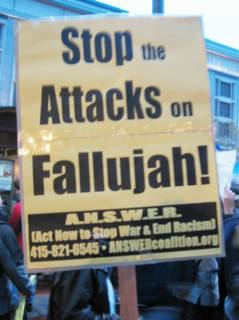 The San Fran demonstration climaxed by burning the President in effigy: 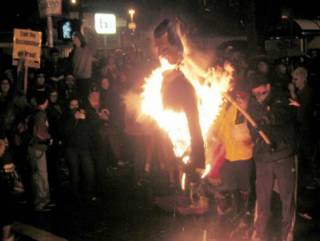 The Democratic party was founded by Thomas Jefferson. Decrying English autocracy, Jefferson justified this country’s creation in his Declaration of Independence. Two centuries later, Jefferson’s heirs loathe America, distrust democracy, and flirt with anarchy. Thomas Jefferson would neither recognize nor join the party of Michael Moore.

The Liarfuhrer of the combined forces of unfettered corporate greed and undemocratic theocracy has led his thoughtless followers to the promised land of arrogance, thought-control, and selfishness run amock.

The New York Post reports former President Clinton wants to tug the party back to center:

Democrats "shouldn't be all that discouraged" by Kerry's defeat.

Clinton said it would be "a mistake for our party to sit around and . . . whine about this and that or the other thing."

Clinton attributed Kerry's loss to the Democrats' failure to combat how they were portrayed by Republicans to small-town America.

Democrats "need a clear national message, and they have to do this without one big advantage the Republicans have, which is they won't have a theological message that basically paints the other guy as evil," he said.

Telegram for the Junior Senator from New York?

your boat new orleans tug blog is great thanks